Youth volunteering charity vInspired closed last month owing over £500,000 to creditors and does not have sufficient assets to cover its debts, documents filed with Companies House show.

vInspired was set up under the last Labour government as a vehicle to encourage youth volunteering, but its funding was cut by the Conservative Party and it struggled to diversify its income before announcing its closure in November.

Money owed to preferential creditors, which comprises £36,000 to employees in arears and holiday pay and £8,000 to pension schemes, totals £44,000.

At the time of its closure, vInspired’s main activity was running the National Citizen Service in the North East, but this will continue through vInspired Education, which is constituted as a separate legal entity.

In a statement announcing the closure, trustees said: “It was thought that the charity’s financial position would support its journey to commercial sustainability in 18-24 months, and its organisational strategy, business plan and income generation strategy were built on this timeline.

“vInspired has sadly since found that the charity’s position is not as secure as thought, due to significant challenges in the funding environment and unexpected changes to cash flow and income.” 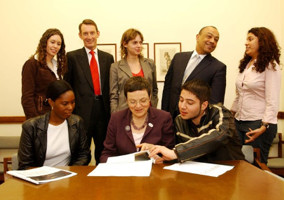 Mustafa Kurtuldu: How we set up vInspired