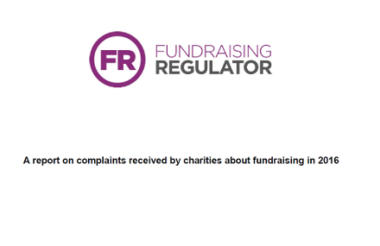 The Fundraising Regulator has today published its first fundraising complaints report, which shows that levy-paying organisations received over 42,000 complaints from members of the public in 2016.

The regulator published its first complaints report today, taking the data from submissions from 893 charities of different sizes spread across the bands of its levy on fundraising spend. The total number of complaints received by those organisations from the public was 42,782.

The report showed that addressed direct mail was the most complained about fundraising channel in 2016, receiving over 38 per cent of total complaints, which equates to over 16,000 complaints.

Door-to-door fundraising was found to be the next most complained about channel, generating nearly 7,000 complaints or 16 per cent of the total. This was followed in third by both email fundraising and clothing collections, which received around 10 per cent of total complaints each.

The regulator said it is currently receiving “a slightly higher number of complaints than the FRSB” was at the same stage, and said it expects “to receive around 1,000 complaints” in 2017-18, should current levels be maintained.

Stephen Dunmore, chief executive of the Fundraising Regulator, said: "This report is a helpful and informative document which demonstrates the nature of complaints made by the public about fundraising practices and the positive progress made by the sector in addressing these concerns.

“We are delighted to have received nearly 900 responses, demonstrating the collaborative nature of the sector, as we work together to learn from complaints in order to improve public confidence in fundraising practices.”

The report also broke down the number of complaints received by charities based on the tiers of the Fundraising Regulator’s levy on fundraising spend.

This showed that the most complained about charities in terms of income size were those which spent between £2m and £4.9m per annum on their annual fundraising operations, the equivalent of paying £4,000 a year for the levy.Fundraising charities in this bracket of the levy received 9,608 complaints between them.

However the regulator also said it has “been particularly pleased that a number of charities who were not able to participate this year have expressed a wish to be a part of the process in future years”.

The report also said that the regulator is “evaluating” its approach to gathering information for future reports and will be “shortly making proposals on what we might do different in future years as part of our regulatory role”.

The Fundraising Regulator also announced it would be producing guidance in 2017/18 which will “set out our expectations for how charities should deal with complaints, as well as providing a clear definition of what we consider to be a ‘complaint’”.

Majority of fundraising carried out to 'high standard', says IoF

In response to the report, the Institute of Fundraising said the "low proportion of complaints compared to contact with the public" showed that the "vast majority" of fundraising is carried out to a high standard.

Peter Lewis, chief executive of the IoF, said: "As the Fundraising Regulator points out, there is a low proportion of complaints compared to contact with the public, which highlights that the vast majority of fundraising is carried out to a high standard. However, there is always room for improvement and these findings will help the fundraising community to do even more to improve the way charities ask people for support.

"Good fundraising charities see a complaint as an opportunity to engage further with potential donors and explaining the importance of investing in fundraising and the benefits it brings to beneficiaries." 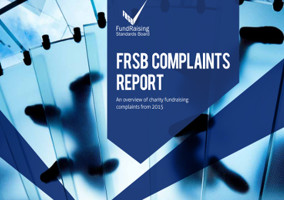