Sarah Vibert: The economy may look bleak, but there are things charities can get excited about this year

Sarah Vibert says that being able to step back and consider the longer term is important for charity leaders, ahead of NCVO’s annual publication looking at big picture issues affecting the sector. 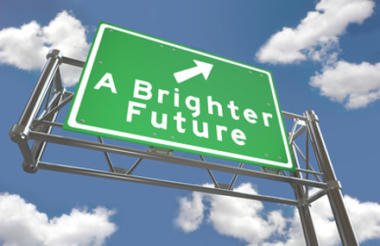 I often think that being an optimist is a prerequisite of being a leader in the charity sector. But even the most optimistic among us sometimes have to admit that there are things we can’t control.

Few of us can do much to influence the economic conditions facing the country, for example, which still look rather bleak as we head into 2020. And we can only watch from afar as the political wrangling continues in Westminster and Brussels, to the delight of journalists and the despair of anyone who would rather to talk about social care or the environment.

However, we can all pay attention to the patterns in front of us: of what is happening in our country economically and politically, as well as considering the way our public services are delivered, how social attitudes are changing, and how technology shapes our world.

That is what NCVO’s latest Road Ahead analysis sets out to do. It is released on Monday. It is the latest in our series of annual papers which tries both to predict what the next twelve months holds and to support charities to prepare for the challenges and opportunities likely to result.

Essential work of planning for changes

This isn’t about charities responding to sudden, unforeseen crises – although they are often great at this – but the essential work of planning for how changes in the wider environment are going to affect their organisations, supporters and beneficiaries in the longer term.

I am new to the NCVO team, but not to the charity sector (I started my career at the brilliant Whizz Kidz) and not to the Road Ahead.

When it landed in my inbox at my previous job running The Neurological Alliance – a coalition of more than 80 organisations supporting people affected by brain and spine conditions – the Road Ahead was an invaluable reminder of the world beyond the healthcare sector. My day-to-day concerns were NHS commissioning structures, new treatments and patient pathways, but here was detailed analysis which prodded me into thinking about the bigger picture. It was careful, evidence-based work which helped me and my trustees plan much more broadly.

As such, I know how useful the analysis can be for charities, so I know the importance of getting it right.  Running a charity – especially a small charity – is hugely rewarding but also relentless.  There are precious few opportunities to pause and consider bigger changes coming over the horizon. The Road Ahead provides busy people, who don’t have time to step back from the day job of working for beneficiaries, with a way to do just that.

Depressing reading but some things to get excited about

At first glance, even for the most optimistic amongst us, some of the trends highlighted in Road Ahead make for rather depressing reading.  Yet I think there is an important social and political theme the charity sector can get excited about.

There is a melting pot of ideas within the new government as it starts to unpick what its new majority means, and how it might sustain its appeal to people whose votes it ‘borrowed’ to win the election. Politicians are starting to pay greater attention to investing in towns which have been neglected for too long. Talking about ‘placed based’ approaches to civil society has been commonplace in recent years, and this is our chance to show what such talk actually means.

This might include building a community centre which will house parent and baby groups, youth clubs and coffee mornings for elderly people. It could mean the room above the library where counselling sessions are held for people with mental health needs, or developing adventure playgrounds which are safe and well-lit for the kids using them. It might also mean a campaign to save the village pub where people come together, feel less isolated, and discuss ideas which later turn into new projects.

Crucial role for charities in driving projects from community

The key thing about making these projects successful is that they are driven by local needs and assets, not dreamed-up in an office in London. There is of course a crucial role for the charity sector here, a large part of which is rooted in local communities. We also need to have a debate about how to fund these initiatives, although it is important to remember that funding isn’t an end in itself but the vehicle for realising the goals defined by communities.

I’ve just come from the frontline of running a charity, so I know we need more than warm words. If NCVO is going to play a key role in helping civil society survive and thrive in 2020 and beyond – and I have no doubt that we will – it will be because members are front and centre of everything we do.  We need to be courageous in speaking up for our members – who represent every corner of the country and pursue every imaginable cause – at a time when too many people are ready to talk us down.

We also need to be the extra person in the teams of each of our member organisations. The person who thinks through the important things which I didn’t have time to focus on when I ran a small charity.

The Road Ahead is an example of NCVO doing just this: taking a lead role in preparing the sector for doing good far into the future. 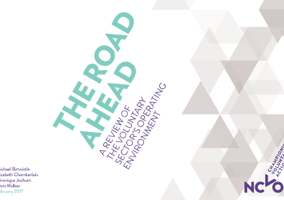 NCVO warns of 'even more pressure on charities' in 2017