Brexit and a weak economy mean charities should prepare for a difficult year ahead, NCVO has warned.

The warning comes as the Office for Budgetary Responsibility (OBR) predicts growth by 1.6 per cent in 2019, below the EU average of 2.0 per cent, while The Resolution Foundation predicts that benefit freezes will leave low-income household more than £200 worse off in 2019.

NCVO is suggesting that this could reduce government investment in charities and limit the public's ability to donate to charities.

Meanwhile, the umbrella body is warning that charities will also be impacted by increased demand as local councils are facing an £8bn funding shortfall and household debt is growing for the first time in 30 years. It also said that an ageing population will increase health, social care and housing costs and requirements, which may impact charities working in these fields.

NCVO’s annual report, The Road Ahead, highlighted the difficulties charities may encounter in the upcoming year using PEST analysis- an analysis of political, economic, socio-cultural and technological macro factors to forecast growth and direction for operations.

It said: “One need only scan the covers of current affairs periodicals, foreign policy journals, and newspaper headlines to get a sense of the deep concern leaders, analysts, and commentators have for the future of the liberal international order, and for each nation’s society – including our own. The sooner charities reflect on these challenges and identify the opportunities ahead, the better prepared they will be to respond.”

Brexit was another key concern highlighted in the report. UK charities receive some £300m in funding from the EU’s European Social Fund (ESF) each year.

While the government is creating alternate funding sources to safeguard these fund, the mechanism of this is yet to be determined. The report said that Brexit has created an “attention deficit”, meaning that charities could struggle to get politician’s attention. It added that the increasing polarisation of parties is making it more difficult for charities to forge coalitions.

It also argued that Brexit may impact the import of medicines and other supplies, while a no-deal could invalidate funding and research agreements.

Paul Winyard, senior finance analyst at NCVO, said: “The uncertainty around Brexit makes it difficult to accurately predict where the UK economy will go over the coming year, although most experts remain downbeat about the short-term prospects. While government finances have somewhat improved since last year’s Road Ahead, limited growth and existing spending commitments made by government mean pressure on voluntary sector funding and support is likely to continue for the foreseeable future.”

The report made a number of recommendations to charities for the new year. For instance, it encouraged charities to make use of technological advancements such as contactless payments to encourage fundraising and good use of social media to engage supporters.

It said: “Moving forward, charities will still need to focus on making their website mobile friendly and accessible to users with varied needs. They also need to be aware of how content development is changing and what it means for them. Organisations might consider investing in new technologies, eg progressive web app technology which delivers an app-like user experience within the browser, or creating content that is optimised for artificial intelligence.”

Despite the difficulties, the report argued that with the right strategy, charities can flourish, adding: “Civil society has a history of responding to the greatest challenges. Looking back, there is not one occasion when charities and their volunteers haven’t stepped up”

Karl Wilding, director of public policy and volunteering at NCVO, said: “I hope trustees and senior managers will use Road Ahead as a tool to reflect on how the wider environment will impact their own organisations, so they can feel prepared for what 2019 might bring.” 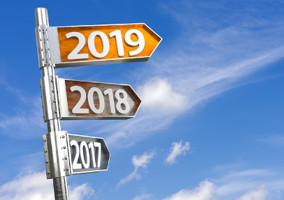 Kirsty Weakley: What can charities expect from 2019?