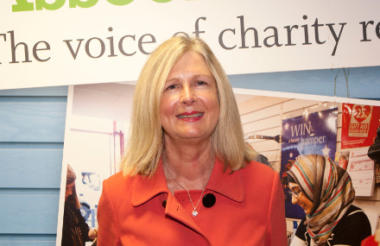 The institute is based on the University of Cambridge’s Biomedical Campus. Hannon has worked for CRUK’s Cambridge Institute since 2014. He joined from the Cold Spring Harbor Laboratory in New York.

The Charity Retail Association has appointed Anne Webb as chair of the board of trustees.

Webb was elected at the organisation’s AGM in London last week. She was unanimously chosen to replace outgoing CRA chair Ben Merrett, who has served his maximum term of office.

Webb is currently the deputy trading director of Oxfam.

Karen Brown has been appointed chair of the trustee board of the Mines Advisory Group.

Jane Cocking, chief executive of MAG said Brown “brings a wealth of creative, media and organisational expertise and I have no doubt we will benefit enormously from her insight and guidance”.

Combat Stress has appointed television presenter and historian Neil Oliver as an ambassador in Scotland.

Oliver recently visited Hollybush House, the Combat Stress treatment centre in Ayr, to meet with veterans supported by the charity.

Sue Freeth, chief executive of the organisation, has welcomed Oliver’s appointment and said he will help raise awareness of the work the charity does in Scotland.