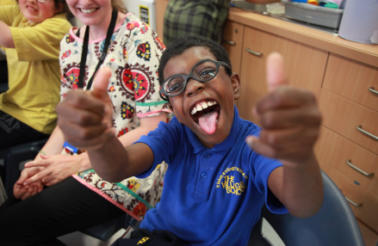 SeeAbility has taken the Overall Award for Excellence at this year’s Charity Awards for its work to persuade the NHS to carry out eye tests for children with learning difficulties at all special schools across England.

The Trust was chosen as the Overall Winner by this year’s judges from a total of ten category winners; it also won the top prize in the Healthcare category.

When SeeAbility learned that children with learning disabilities were 28 times more likely than other children to have a serious sight problem, it set out to demonstrate to NHS England the huge benefits that could be gained for these children by providing specialist eye care within special schools.

In a six-year pilot programme involving 1,500 children at 11 schools, the charity conducted over 3,500 eye tests and dispensed more than 1,700 pairs of glasses. Nearly half of the children tested had a problem with their vision, and a third needed glasses – yet 44% of them had never had their eyes tested before.

After seeing the results, NHS England has now pledged to commission a model of eye care in special needs schools based on the programme. Over the next few years it is expected to benefit more than 120,000 children. And the charity is also advising on the adoption of similar models in Scotland and Northern Ireland.

Andy Pitt, head of charities – London, at overall awards partner Rathbone Investment Management, congratulated SeeAbility on its win and said: “The Charity Awards celebrate leadership, good governance, innovation and excellence. As investment managers we do everything we can to support the work that the sector does and promoting best practice is an important part of our relationship with charities.

“We are delighted to support these awards and to honour the brilliant work of UK charities large and small.”

She said: “It's a pleasure to be here today. I have walked in your shoes, as someone who has led a charity in the past, but I know that over the last 18 months, all of you have done the most extraordinary work under the most difficult circumstances imaginable. And I'm really honoured to be with you, and present the most esteemed category.”

Accepting the award at the live online ceremony yesterday, SeeAbility's head of eye care Lisa Donaldson said: “Thank you Baroness Barran and thank you Rathbones. I'm humbled and delighted and slightly overwhelmed to be receiving this incredibly prestigious award on behalf of SeeAbility. And it really is a huge team effort from everybody. Our amazing special schools and eye care teams.

“Thank you to Donna O'Brien our policy lead has been amazing from the very beginning. Thank you to Lisa Hopkins our chief executive and all the senior leadership, for believing that we could go out and do a research project and direct clinical services to evidence this unmet need, so delighted this is going to bring attention to the NHS service that's getting rolled out so that more children will get the care they need quicker, and give them an equal right to sight so thank you all so much I'm absolutely delighted. Thank you.”

Su Sayer, chair of the Charity Awards judges, said: “SeeAbility created a brilliantly thought-through programme which has already transformed the lives of many children with both a learning disability and sight loss.

“The charity’s attention to detail, training almost 800 staff and ensuring that each individual would have the support they needed, was exemplary. They understood how important it was for eye testing for children to take place in familiar surroundings at school, rather than in hospital. As a result, many more children were tested and were able to have glasses where necessary.

“We can all appreciate what a huge difference being able to see clearly can make to anyone’s ability to engage in everyday life. This is an outstanding project which, by influencing the NHS, will make a lasting difference to many people with a learning disability across the UK.”

“They tested it, they based it on evidence and they built on their success with lobbying. They’ve interwoven it with the NHS and 50% of their staff have lived experience. I thought it was wonderful.

“We shouldn’t underestimate how complex it is to get the attention of a multi-layered bureaucracy like the NHS at national level, and to produce a model that can be rolled out in a devolved health environment.”

Alongside the nine other category winners, three winners of the Rathbones Covid-19 Response Awards and the recipient of the Daniel Phelan Award for Outstanding Achievement, SeeAbility was presented with its two trophies in an online ceremony broadcast live on Thursday 10 June, hosted by writer, comedian and political commentator Ayesha Hazarika.