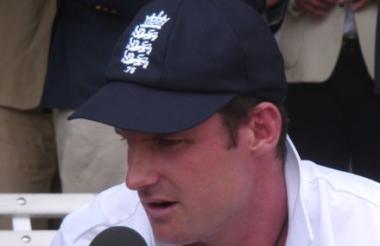 The foundation holds a Red for Ruth day during England's summer test match at Lord’s each year, and raises funds throughout the five-day game.

This is the first time the event has raised £1m.

The charity was founded in memory of Andrew Strauss’s wife, Ruth, who died of cancer in 2018. It funds research into non-smoking lung cancers and supports services to help families affected by cancer.

The foundation confirmed this morning that, after four days of fundraising during England’s test match against India, the total raised was £1,024,000.

It released regular updates throughout the match, showing the total rising from just over £500,000 on Friday to more than £900,000 yesterday afternoon.

The charity said that the total raised was “overwhelming”, and that dozens of families affected by cancer had contacted them for support during the test match.

Red for Ruth events raised £850,000 last year, during England’s summer test series against the West Indies, and just over £550,000 in its first year during a match against Australia in 2019.

The Ruth Strauss Foundation has committed to hold the event every year until at least 2023.

The foundation has raised funds at Lord’s during the match, as well as through partnerships with Microsoft and the official England supporters’ group, the Barmy Army.

Cricket clubs all over the country have held their own events to donate to the charity.

Thousands more pounds will be raised at the end of the day when the charity closes its auction of prizes, which includes memorabilia signed by leading cricketers and tickets to other sports events.

Andrew Strauss said: “In addition to the incredible funds raised, Red for Ruth is also about raising awareness, breaking taboos and, in Ruth’s words, helping families ‘Do death well’.

“To know because of the wonderful support we’ve had 60 more families are not facing grief alone, and [that] many more up and down the country will be supported over the coming months, is exactly what Ruth wanted.”

The charity’s annual accounts show that it agreed a one-off partnership with Cancer Research UK (CRUK) in its first year.

CRUK helped the charity organise and deliver the first Red for Ruth day in 2019, and in return the Ruth Strauss Foundation donated £325,000 to its programme working on lung cancer research.