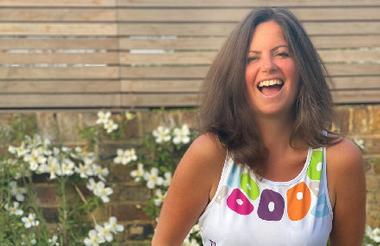 James, who was also known as Bowelbabe, was diagnosed with stage 4 bowel cancer in December 2016.

In May, she announced that she was receiving end-of-life care at home and launching the Bowelbabe Fund for Cancer Research UK.

Since then, the fund has raised over £6.9m and more than £1.2m in Gift Aid for The Royal Marsden Cancer Charity, Bowel Cancer UK and Cancer Research UK, largely surpassing the initial target of £250,000.

The money will help support projects and causes such as clinical trials and research into personalised medicine that could result in new treatments for cancer patients and campaigns to raise awareness of the disease.

Before her diagnosis, James was a deputy headteacher at Salesian School in Surrey, where she specialised in computer science and e-learning. She then started her own blog in which she detailed her cancer experience before writing for the Sun and becoming a host on BBC Radio 5.

James was awarded a damehood on 12 May in recognition of her achievements.

Bowelbabe Fund: ‘An inspiration to us all’

A statement posted on James’s JustGiving page said: “We are devastated by the death of Dame Deborah James and our thoughts are with everyone affected by her loss. Deborah was an inspiration to us all and her incredible work to raise awareness of cancer touched so many lives.

“We will continue her legacy and support the causes Deborah was passionate about so that many more people benefit from new treatments and have more precious time with their loved ones.

“Thank you for your incredible generosity and for playing a part in Deborah’s legacy.”

James was a patron of Bowel Cancer UK since last year.

The charity wrote in a statement: “Everyone at Bowel Cancer UK is deeply saddened that our patron Dame Deborah James has died. Our hearts go out to Deborah’s family and her friends, including the many she made in the bowel cancer community and beyond.

“Deborah was a formidable supporter of the charity who did so much to raise awareness of bowel cancer and make a difference to people affected by the disease. We were absolutely delighted when she became a patron during Bowel Cancer Awareness Month in April 2021, after offering her support over the years since she was told she had bowel cancer.”

It added: “We are truly grateful to have known Deborah and to call her our friend. She was a powerful patron for Bowel Cancer UK, and we will miss her dreadfully. We are determined to ensure her lasting legacy by continuing to raise awareness of bowel cancer and its symptoms, pushing for earlier diagnosis of the disease, and ultimately, saving lives.”

Cancer Research UK: ‘Her impact will be felt for years to come’

Michelle Mitchell, chief executive at Cancer Research UK, said: “We are devastated to hear that Dame Deborah James has died, and our thoughts are with her family and friends. Since being diagnosed with cancer in 2016, Deborah did whatever she could to fundraise, challenge taboos, and raise awareness of cancer – with honesty, compassion and humour. She was an inspiration to so many people, and her impact will be felt for years to come.

“A powerful writer, reporter and broadcaster, Deborah shone a light on the devastating impact of Covid-19 on cancer care, and was a passionate advocate for the power of science and early diagnosis. Becoming a dame was a wonderful and fitting recognition for all Deborah achieved. We’re honoured to have worked with Deborah and her family in establishing the Bowelbabe Fund for Cancer Research UK to continue her legacy.”

She continued: “The fund will support causes and projects that Deborah was passionate about, including working with others such as the Institute of Cancer Research, The Royal Marsden and Bowel Cancer UK. The overwhelming support the fund has received so far is a testament to how many people Deborah touched with her warmth, energy and sense of fun. She was a wonderful person and will be greatly missed by so many people. We are thinking of her loved ones during this difficult time.”

In a statement, the charity said: “We are extremely saddened to hear the news that Dame Deborah James has died. Deborah was an absolute inspiration to so many people with cancer, and a passionate supporter of the Royal Marsden Cancer Charity. We are hugely grateful for her support.

“After being diagnosed with stage 4 bowel cancer over five years ago, Deborah’s incredible positivity, straight-talking, sense of humour and ability to put her best dancing foot forward drew an enormous following. She used her experience and platform to break down the barriers around talking about bowel cancer, to fundraise and to raise awareness of the importance of early diagnosis and research in saving lives.

“Behind the scenes, Deborah would take the time to chat to other patients on social media and offer her advice and support. For someone who loved to get dressed up and speak publicly, much of what Deborah did for the cancer community was actually quiet, understated, and from the chemo chair or in the middle of the night. She will be hugely missed by everyone in the Royal Marsden.”