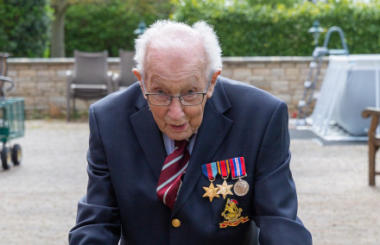 But his fundraiser went viral and total now stands at more than £26m, with donations to its JustGiving page coming in from around the world.

JustGiving said this is the largest total raised in a single campaign on its platform.

Donations are going to the NHS Charities Together coronavirus appeal, which is raising funds to support NHS staff and volunteers during the crisis by offering mental health counselling, providing food and wellbeing packs and covering for travel costs, among other things.

As of last Friday, the appeal had already raised more than £55m of its £100m target. The figure includes £15m of the funds raised by Captain Moore.

NHS Charities Together is an umbrella body for NHS charities that currently has about 170 members. £5m from the appeal has already been distributed.

Captain Moore completed his challenge on 16 April, ahead of schedule, but said he will continue walking and fundraising.

His efforts were featured on national media, including on BBC Breakfast. Since Saturday 18 April, Piccadilly Circus’ advertising screen have been showing a 40-second tribute to him every hour.

He also recorded a version of You’ll Never Walk Alone with singer Michael Ball and the Voice of Care Choir, which is expected to reach number one in the UK Chart this week. The single can be downloaded online and proceeds will go to the appeal. 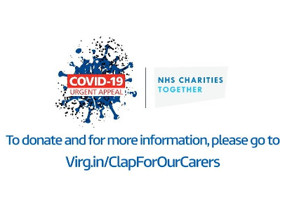