Breast Cancer Campaign and Breakthrough Breast Cancer have today announced that they will merge to create the UK’s largest breast cancer research charity. 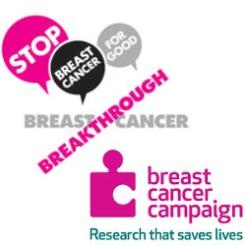 Breast Cancer Campaign and Breakthrough Breast Cancer have today announced that they will merge to create the UK’s largest breast cancer research charity.

A joint statement from the two organisations said the new charity, which will have combined income of around £27m based on last year's figures, is expected to launch in spring 2015 when its new name and branding will be unveiled.

Last year, both charities published strategies with very similar aims. The charities said they agreed that by joining their organisations they would be able to work faster towards achieving their aims and increase research into treating and preventing breast cancer.

Both current chairs, Isla Smith, of BCC, and Stephanie Monk, of Breakthrough, will step down and the search for a new chair by the executive search firm Perrett Laver will begin today, the statement said.

A new senior management team, made up of current directors from both charities, has already been appointed to lead the new charity when it is launched next year.

Fiona Hazell, director of communications at Breast Cancer Campaign, said the merger was not borne out of financial necessity, but from a recognition that they would be able to reach their shared strategic aims faster.

She said: “It will enable us to make a greater difference for women who are affected by breast cancer and tackle the increasing number of cases more effectively.”

She said the merger was not driven by the need to cut jobs, but it is expected that there will be some redundancies as a result.

The aim is to create a “breast cancer research charity of scale – by bringing people, resources and ideas from both charities – in order to end breast cancer”, Hazell said.

Trustees of both charities voted unanimously for the merger to go ahead, she said. The boards have spent the last year scrutinising the risks and opportunities in merging the charities; auditors analysed their plans, she said.

The charities are working on an integration plan for the new charity that includes a plan for bringing together their supporter bases. Both have flagship fundraising campaigns including Breakthrough’s TLC: Touch, Look, Check, and BCC’s Wear it Pink.

In the joint statement, chief executives Askew and Morgan said: “United, we will be a stronger, more effective force committed to putting an end to breast cancer.

“By combining our energies and expertise we’ll make greater progress in more efficient ways and achieve our shared ambition that by 2050, no one will die from the disease.”