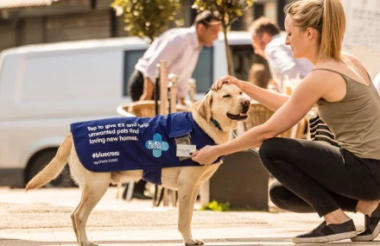 The Blue Cross, Mary’s Meals and the Barbican are the latest charities to trial the use of contactless payment technology to take donations.

People are able to donate to the Blue Cross when they meet one of the charity’s ‘Tap Dogs’, who are kitted out with a special jacket that contains a terminal that allows people to make a £2 donation with a contactless credit or debit card.

Tracy Genever, head of education services at Blue Cross, said: “With today’s increasingly ‘cashless’ society, it made sense to introduce a contactless option to those wishing to give to Blue Cross. Just 'pat and tap' to give a donation.

“And who better to help us than some of the amazing events dogs that help to raise awareness and inform Britons about the work we do. These wonderful dogs really are the best ambassadors we could possibly ever hope for.”

Tap Dogs are appearing at events throughout May. They are all behaviour-assessed event dogs who are used to wearing coats and interacting with people.

International aid charity, Mary’s Meals, has partnered with a marketing agency, Earnest, to create a bespoke contactless payment terminal called Lunchbox. Four cafes in London and one in Oxford are trialling the devices. The box has been provided by Payter, a technology company.

People can tap their contactless credit or debit card to donate 30p to the charity, which is the amount it costs the charity to provide five school lunches.

Alan Brown, executive director of Mary’s Meals UK, said: “It’s amazing the ways that people are inspired to reach out to the world’s poorest children through our work. This innovation uses some of today’s best technology to allow people with busy lives to make a real difference in the world without having to set aside time to do it.”

James Wood, director of Earnest Labs, added: “While there has been a 300 per cent increase in contactless payments in the UK over the last year, we think it’s about time the world of donations moved on from change in a bucket and being hassled while you do your shopping.”

Elsewhere the Barbican gallery in London has also installed contactless donation points at its Curve gallery and will install terminals in more places if the trial is successful. Initially the donation amount has been set at £2 and people are still able to donate with cash.

Earlier this year Cancer Research UK trialled the use of contactless collection buckets in 16 locations during its World Cancer Day fundraising efforts. And last year the Charities Aid Foundation carried out research with Save the Children and Visa, which found that when given the choice 30 per cent of people opted for the contactless donation tin over the cash one.