Who sits on the typical trustee board? 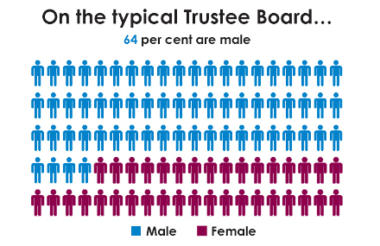 Today's landmark report on trusteeship, published by the Charity Commission, shows that the typical trustee is likely to be white, male, and over 60.

We look at the key statistics from new report, published today and called Taken on Trust: The Awareness and Effectiveness of Charity Trustees in England and Wales.

The report is taken from a survey sample of 19,064 trustees through a national survey in January 2017. Around 3,500 trustees responded to the survey.

The average age of a trustee was 61. This is four years older than the previous estimate of 57.

The report notes that “while it is encouraging that many people beyond normal retirement age are contributing their time as trustees, it is perhaps a little concerning that over 8,000 boards have an average age of over 75 years”.

In terms of the length of fixed terms, 3 years was found to be the most frequently reported, with 46 per cent of respondents reporting that term of office. This was compared to 18 per cent who reported just a single year term of office, and some three per cent which reported single terms of 6 years.

The majority of trustee respondents said they had been recruited to a charity board informally, with over 70 per cent being asked to become a trustee directly by either the chair or a fellow board member. Only 5 per cent of trustees responded to a job advert.

The average trustee spends 4.88 hours on their trustee duties, in addition to other services they may carry out for the charity.

The median time was much lower - between one and four hours a week.

The report also found that “a large minority” of trustee respondents, “just under 50 per cent”, said they had been, or still are, users of the services provided by their charity.

This is perhaps less surprising than it first seems when considered that many, many charities are small organisations which provide informal networks, such as village halls, women's institutes and friends of the local parish church.