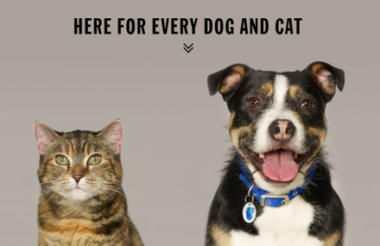 Meet Misty and Peanut: the adorable final nail in the coffin of journalism

Happy Friday dear readers and if you’re anything like the Society Diarist you’ve probably spent the last two days wandering around squinting up at an azure expanse of clear sky asking out loud to other bemused denizens of your particular conurbation ‘what is this giant, heat-giving golden orb and can we make it our new god?’ Spring has sprung people, and this column is hungover and sweaty enough already to last a thousand summers.

This week in charitable sector satire: following a cheeky rebrand, the artist formerly known as Battersea Dogs and Cats Home has got animal journalists now; yet another chain of charity shops falls foul of 50 Shades of Grey, and BuzzFeed turn up a real charity scoop.

First this week we go to Battersea – no, not the London borough as such, although obviously Battersea does reside in Battersea – and the news that the organisation has now appointed a dog and a cat to be reporters on the ground in one of its rehoming centres.

Peanut and Misty are continuing to report on everything we do to get our dogs and cats ready for their new homes. In this episode, Misty enjoys a cuddle while Peanut meets new resident, Norman. #RescueIsBest pic.twitter.com/z1KlvpfkF8

Yes, meet Peanut the dog and Misty the cat who, along with being cuddly and adorable, are stealing unionised NCTJ-affiliated undercover reporter roles away from *proper journalists* all in the name of sweet, marketable ‘viral content’.

Quite frankly, this latest development coming out from under the shadow of the onetime Battersea Power Plant is, for the Society Diarist and its editorial colleagues here at CSM towers at least, deeply disturbing. Has our industry not suffered enough at the hands of Rupert Murdoch monopolies, the 24-hour digital news cycle, the death of local newspapers and Twitter?

The last thing this particular hack needs is having a couple of cute and furry cub reporters further muscling in on its hard-won turf. This column has so far just stopped short of going around the news desk, cocking its leg on every computer, notepad, phone and contact book, but the time for such drastic action may well be coming soon.

One of Diary's colleagues even made a direct complaint to the NCTJ and recieved this, frankly pawful, tweet in response:

We hear they did particularly well in their media paw exams

Battersea’s very own Woodwoof and Meowstein have put together six pretty hard hitting multimedia content packages on the charity’s website landing page, going deep undercover to unearth the truth about everything from “arriving at Battersea” right through to being chosen by a human companion or, as Peanut and Misty put it, getting “ready to be loved by you”.

No, you’re the one that’s sobbing uncontrollably!

Peanut and Misty have been bought on board by Battersea as part of its rebrand which, along with a name and logo change, has also seen a bit of an overhaul in terms of what the charity’s trying to achieve. Both have become central to a new “awareness campaign” that a Battersea spokeswoman said would “introduce more people to the many benefits of rehoming a Battersea dog or cat”.

At the risk of coming over all philodoxical, this column can’t help but declare with all sincerity – much like any gammon-faced, 55+ year old, male Daily Telegraph columnist – that the world used to be a better place, when people came to other people (or pseudo-anonymous, satirical weekly diarists) for their news.

Where does it end, if cats and dogs are breaking charity-sector scoops on Twitter? What next? Sentient fundraising robots writing features for magazines? Charity accounting algorithms doing pieces-to-camera about financial year-end income fluctuations? Board of trustee conference tables doing podcasts about what constitutes proper charitable governance with the chair (literally, just a chair)?

Ah, journalism is a young pup’s game anyway. This diarist is jacking the whole thing in to go into PR.

50 Shades of please go away

Staying tangentially with animal charities now, we turn to Blue Cross and the news that its charity shops across the UK are reporting that the appallingly-written-global-mega-success-erotic-novel-turned-equally-appallingly-acted-but-also-equally-mega-globally-successful-film-franchise 50 Shades of Grey has been the most commonly donated item so far this year.

Blue Cross’ retail manager has said the charity is “grateful for donations of book, DVDs, good quality clothing and some of our shops also take in vintage furniture”. Although, she makes no mention of artfully constructed sex-swings or profoundly disinfected S&M whips and chains.

Speaking as we have been a bit about journalism, we go to the latest instalment of a fantastic investigative series by the intrepid reporters over at BuzzFeed.

Yes, while digging around the accounts of telecoms giant Lycamobile, BuzzFeed’s investigations unit came across a rather tasty little scoop. It appears that the British government refused to assist a French investigation into suspected money laundering and tax fraud by Lycamobile because, and these are direct HRMC quotes, the company is “the biggest corporate donor to the Conservative Party” and also had recently given over a million euros to the British Asian Trust, founded of course by bonnie Prince Charles.

Now the British Asian Trust has told BuzzFeed that everything is above board and, sure it may well be. But the whole thing isn’t a great look for either the Tory party, or indeed for Prince Charles.

The story is really worth reading in full. However, if you don’t have the time to read the whole thing, these two paragraphs should be more than enough:

When BuzzFeed News first approached HMRC to ask about its response to the French request, the agency’s senior press officer strongly denied that Lycamobile’s donations would ever be cited as a reason not to conduct criminal raids. “No HMRC official would ever write such a letter,” he said. “This is the United Kingdom for God’s sake, not some third world banana republic where the organs of state are in hock to some sort of kleptocracy.”

However, after verifying the contents of the email seen by BuzzFeed News, another HMRC spokesman said that it was “regrettable”.

Just once this columnist would like to get an email from a press officer half as entertaining as that one.

Finally to ‘any other business’ this week – no, not you Andrew O’Brien! – and a little juicy morsel the diarist picked up on its travels in the charity world this week.

As they say in the business ‘a picture is worth a thousand words’ and, with that in mind, wrap your maculae around this candid snap. 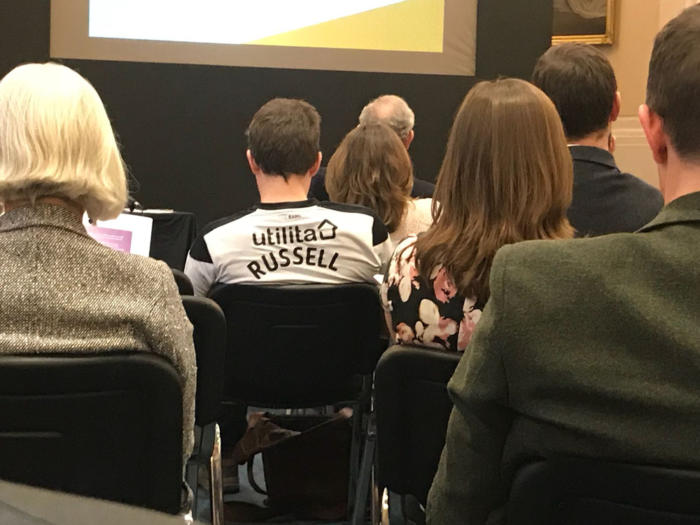 This was taken at an NPC event last night, and is a still picture of former impact measurement aficionado and one-man communications machine Russell Hargrave rocking a personalised Derby County football shirt.

Sure, it’s not like the event was black-tie or anything but, still, have you no shame, sir? Have you no sense of decorum? Did you at the very least pop a tweed and leather patches blazer over the top of your Rams jersey? This was in Covent Garden, not Pride Park. It was hot as well. Did you just decide ‘to hell with it all’ and pair your top with a jaunty pair of shorts and flip-flops?

Shame about the run-in for the Championship Playoffs as well. 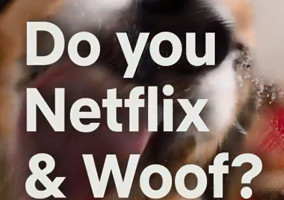 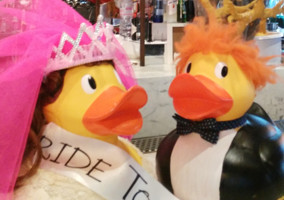 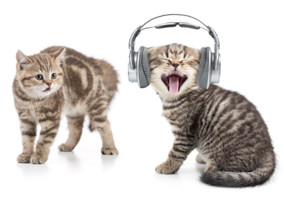