Must we get our kit off to get noticed?

Rowena Lewis is shocked by the Autism Trust's new poster campaign showing its founder 'getting 'em out' for the boys. 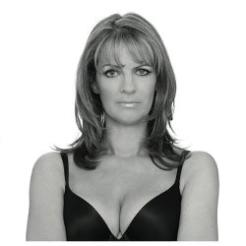 Rowena Lewis is shocked by the Autism Trust's new poster campaign showing its founder 'getting 'em out' for the boys.

What kind of society are we in where a woman feels that in order to be listened to she must strip off her clothes?

Polly Tommey, founder of the Autism Trust, has found a new way to get politicians and the public (read men) to sit up and listen. On 29th March she launched a nationwide billboard campaign featuring a larger-than-life image of her upper torso in nothing more than a bra. The sign reads “Hello boys! Autism is worth over 6 million votes. It’s time to talk.”

The Autism Trust registered as a charity in 2007. The Trust’s aim is to create a future with purpose for children everywhere with autism. Perhaps I’m not getting it, but what does a future for children with autism have to do with Polly’s cleavage?

Moreover Downing Street has granted Polly reception in response to the campaign. What kind of message does this send out to the charity world? That in order to get party leaders to take children with autism seriously women need to get their kit off?

Is the charity sector willing to embrace the wider societal change towards this objectification?  Is enough thought given to the evidence that links sexualised images of women and attitudes that underpin violence and discrimination against women – as recognised by the UN Convention to Eliminate Discrimination Against Women? And where does this leave the women’s sector? Groups such as Object, Refuge, Women’s Aid, WRC, Pinkstinks and Fawcett are campaigning to stop violence against women, rape, objectification, and calling for a gender equal society where women are valued and respected as individuals, not for their ability to get their kit off.

Isn’t it about time the sector that champions social justice took a stand against the sexualisation of women in our culture, rather than embracing it wholeheartedly?