Can social innovation save our coastal communities?

The social sector could play a pivotal role in ensuring the survival of flood-prone communities, says Simon Steeden. 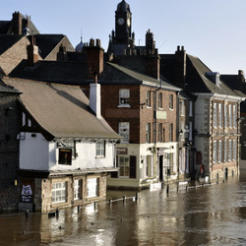 Flooding in the City of York

The social sector could play a pivotal role in ensuring the survival of flood-prone communities, says Simon Steeden.

Recent devastating flooding across England and Wales demonstrates a palpable need for action if affected communities are to survive in the long term.

Extreme flooding is happening with an unwelcome regularity and the role of climate change seems clear. But the government is too financially constrained to address the problem and market failure prevents the private sector from providing the public good of long-term mitigation. The recent spat between the government and the insurance industry over the provision of insurance to flood prone properties demonstrates the unsustainability of insuring households affordably without taking steps at the same time to reduce the incidence of flood damage.

The social sector has the qualities needed to fill this gap. Finding innovative solutions to tackle market failures and address social and environmental problems is an area in which charities, social enterprises, mutuals and community groups have traditionally excelled.  Witness the development of the cooperative movement by the Rochdale Pioneers in the mid-nineteenth century, using the pooling of scarce resources to provide access to much-needed produce at affordable prices.  Or use of the fair trade mark to drive international improvements in employment conditions through informed consumer choice.

One possibility is to employ some of the tools of social and community finance. For example, in an area perennially affected by flooding, a charity could be formed to build flood defences. If set up as a community benefit society, the charity could use a community share offer to raise some of the funding needed to install those defences. The charity could also seek donations from the public (supplemented by gift aid) and investment from social investors such as charitable foundations, social finance intermediaries and perhaps socially-concerned businesses and wealthy individuals.

In order to pay back the investors and secure the charity’s long-term future, some more innovative thinking would be required. One solution might be for the charity to enter into a contract with local people most at risk of flooding, before taking on the community and social investment. Under that contract, part of the savings on insurance premiums of those at-risk households which result from the new flood protection would be committed to the charity, in return for the charity committing to finance those defences up-front.

For example, if a householder receives a £40 per month reduction in premiums because their house is less prone to flooding, they might agree to pay £20 or £30 of that to the charity each month for 20 or 25 years. The government could even legislate for those savings to be paid to the charity by affected households via the insurance companies themselves, in a model similar to that used by the Green Deal with electricity savings from household retrofitting.

In this way, the charity could use a long-term income stream from the households which benefit most from flood defences to provide a return to shareholders and investors and ensure long-term upkeep of the flood defences.

The feasibility of this model would greatly depend on whether it is possible to calculate the likely long-term savings on insurance premiums attributable to the building of new flood protections. Those savings would need to be sufficient to cover the cost of installation and maintenance and also to provide a return to shareholders and investors. But if that 'golden rule' could be achieved, the sector would be able to facilitate the protection of communities in a way that benefited individual householders, socially-minded investors and the public purse.

Communities are already experimenting with charitable solutions to problems of recurrent flooding.  For example, in Suffolk, the East Lane Trust sold coastal land donated by local people to developers and used the proceeds to build flood defences to protect local homes, a culturally significant Martello tower and farming land.

But further innovation by the social sector could help many more communities take local ownership of climate change mitigation efforts.

Flood defence charities might even form part of a wider community eco-system designed to reduce the extent of climate change at the same time as mitigating its harmful impacts. One approach here could be to link flood mitigation charities with community energy projects, with have been established in many parts of the UK over recent years to produce solar, hydro or wind power, financed in part through government-mandated feed-in tariffs which subsidise the electricity they produce. If the surpluses produced by these community energy projects were used to provide some of funding for a charity set up to build local flood defences, the local community would simultaneously be contributing to the reduction and mitigation of climate change.

Clearly, our long-term global problem with climate change is becoming increasingly visible locally and, in the short-term, with recurrent extreme flooding. If the government will not step in, then new thinking is required to provide a way for communities to take some direct ownership of their own long-term survival, in a way that fairly shares the risks and rewards between members of those communities.