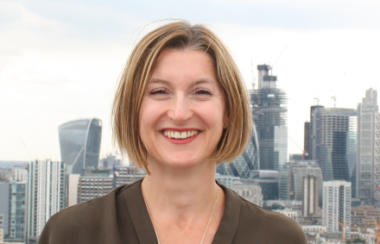 Disability charity, Sense has appointed Louise Robertshaw as group director of engagement. She succeeds Chris Jarrett, who left in December 2021 to become fundraising director at RNIB.

Robertshaw joins from London’s Air Ambulance where she was director of fundraising and marketing for four years. Formerly, she worked at Guide Dogs and Bracknell Forest Council.

Sense CEO Richard Kramer said: “Louise will play a key role in leading the engagement directorate and taking forward our strategy as Sense works towards breaking down the barriers disabled people face.”

The medical charity Scar Free Foundation has appointed ambassador Dr Hemani Modasia-Shah to its board of trustees. Modasia-Shah is a GP, with lived experience of scarring:

She said: “At the age of 18 months I survived burns to 35% of my body when a candle caught onto my pyjamas, resulting in significant burn scarring on my head and ear, across my chest, and on my legs. I was first introduced to The Scar Free Foundation by my surgeon who arranged for me to meet with the chief executive Brendan at the Royal College of Surgeons.

“As a doctor I couldn’t be more excited by scar free healing for my patients, and as a burns survivor – and a mother - I just look forward to future generations having reduced or even no scars from accidents and operations.”

The National Trust welcomes René Olivieri as its new chair in February. He succeeds Tim Parker, who stepped down in October 2021 after seven years in the role. Since then, Orna NiChionna Turner has acted as interim chair.

Olivieri has been chair of RSCPA since 2019. Before this, Olivieri was chair of the Royal Society of Wildlife Trusts for six years, and interim chair of the National Lottery Heritage Fund. He was also chair of Belgrade Theatre for a year in 2011 and the CEO of Blackwell Publishing from 2000-2007.

On his appointment, Olivieri said that he was “delighted” to be at the helm of the 126-year-old charity. He said: “We must all work together to preserve and promote our heritage while taking climate action and restoring nature. I want to ensure the National Trust, which is privileged to be able to take such a long view, plays a leading role in realising this ambition”.

The Reading-based homelessness charity, Launchpad has appointed Sean Sutcliffe as its new chair. He succeeds Suzanne Stallard, who stepped down after three years in the role. Stallard is to remain in the charity as vice-chair.

Sutcliffe has been a trustee at the charity for seven years. He has worked as a chief executive for the businesses for over 15 years and is currently heading Oxford Space Systems. Previously, he was also a trustee of an international development charity.

Su Hamblyn, Launchpad’s CEO, said: “I’m delighted Sean has been elected as chair at Launchpad. He brings a real passion for the cause, significant experience in growing and leading small businesses, and an innovative approach.”

Overcoming MS celebrates its 10th anniversary with a new chair

Downshan Humzah becomes Overcoming MS’s new chair of trustees in time for its 10th anniversary. He succeeds the founder of the charity, Linda Bloom, who has lived experience of MS and chaired the charity for nine years. Bloom has now been elected president.

Previously, Humzah was a trustee of the MS Society and chair of the UK advisory board for Board Apprentice Global, and currently serves on the advisory boards of Ramadan Tent Project. Humzah has experience working in senior roles at Procter & Gamble, Orange, Virgin Media and RSA. He is a board director and strategic adviser.

Martlets hospice has announced that Claire Irving will become its new CEO in March. She takes over from Imelda Glackin, who was CEO of the hospice for seven years.

Irving has worked at St Catherine’s Hospice from 2006, where she was appointed director of income generation in 2015 and acted as interim CEO during 2020.

Michael Nutt has been appointed chair at Camphill Village Trust, a charity that supports people with learning difficulties.

Jewish Care has appointed Rachel Jones as its director of care, housing and hospitality. She joined charity as interim head of housing and domiciliary care in May last year. Jones will start in April and takes over Gaby Wills, who has worked with the charity for 23 years.

Jones has been a carer at Norwood, Kisharon and other care providers. She was executive director at Sunridge Court, a residential care home for Jewish patients, for eight years.

The Prince’s Countryside fund, a charity set up to help support rural Britain, has appointed Heather Hancock as its chair. She succeeds Lord Curry of Kirkharle who has stepped down after ten years.

Hancock is a master at Cambridge University. She has experience as a non-executive director at Rural Solutions and managing partner at Deloitte. Hancock has held several roles on charity boards, including being chairman at Food Standards Agency.

Gibson was a HM Inspector of Education and has worked in partnership with the Care Inspectorate and Audit Scotland. She sits on a number of boards, for example, she is a non-executive director with NHS 24.

Make 2nds Count founder Lisa Fleming said: “Having Anne on board will be transformational for us as we drive the charity forward and evolve. Her appointment is just the most exciting start to what we predict will be a very constructive year for us.”

Corali Dance Company, a London-based charity where people with disabilities can learn to dance, has appointed two new trustees:

Richard Meade has been appointed as the new director of Carers Scotland after the retirement of Simon Hodgson, who occupied the role for over 10 years.

Meade joins from Marie Curie where he was head of policy and public affairs.  He will be responsible for leading the charity in Scotland and Northern Ireland.

On his appointment, Meade said: “These next few years we need to see action from governments and communities to provide the support that carers need as we emerge from the Covid pandemic. I look forward to working with the charity and with partners to make life better for carers in Scotland.”

Pat Venditti has been appointed interim executive director after John Sauven stepped down as Greenpeace’s director.

Sauven had held the role for 14 years and Venditti will begin the role on 1 February.

“It’s an honour to be asked to lead an organisation like Greenpeace UK during this transition phase, and I’m very grateful to John and the board for this opportunity. This is going to be another crucial year for global efforts to avoid a climate catastrophe and the collapse of nature, and Greenpeace UK is ready to play its part.”