Charities across the country reported a sharp rise in online donations for Giving Tuesday, figures have revealed. 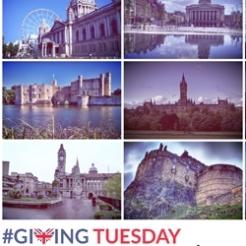 Charities across the country reported a sharp rise in online donations for Giving Tuesday, figures have revealed.

Software provider Blackbaud said donations through its services in the UK went up by 270 per cent compared to the first Tuesday of December last year.

Visa Europe said that more than £2,500 was donated every minute on Visa cards in the UK and donations were up by 10 per cent on last year.

A spokesperson for Visa Europe said: “Data is still coming in but early indications suggest the number of donations made with Visa cards on #GivingTuesday was up around 10 per cent week-on-week and year-on-year.

‘’That’s the equivalent of more than £2,500 donated every minute on Visa cards in the UK”.

JustGiving’s co-founder, Zarine Kharas, said: “At the heart of #GivingTuesday is the desire to bring people together to show the world why it’s good to give, which is why JustGiving is pleased to be a key partner.

‘’The social nature of the campaign is in tune with JustGiving’s role as a social platform that unites people around the world with the causes they care about.

‘’It is a perfect antidote to Black Friday and Cyber Monday - a day dedicated to thinking about and taking action together for charitable causes close to everyone’s hearts.”

#GivingTuesday trended on Twitter on Tuesday with a host of celebrities pledging support for charities.

Over 2,500 tweets an hour were posted about #GivingTuesday and hundreds of charities and good causes were highlighted.

Diver Tom Daley tweeted “Happy #GivingTuesday guys!” and posted a video to raise funds for The Brain Tumour Charity which he supports after losing his father Robert to brain cancer three years ago.

Actress Carey Mulligan was among hundreds of #GivingTuesday supporters to tweet an #unselfie posing with a sign to obscure her face with a hand written note showing her support for the charity War Child.

David Tennant also posted an #unselfie holding an iPad above his head showing support for Circle, a charity that improves the lives of children in Scotland.  He also tweeted support for Headway Essex, a brain injury charity War Child.

#GivingTuesday asked people to mark the day by doing one thing for a good cause after the shopping days of Black Friday and Cyber Monday.

John Low, chief executive of the Charities Aid Foundation, said: ''We're delighted by how popular #GivingTuesday has been in the UK. People up and down the country took it to their hearts and made it a day to give back, think of others and do something for a good cause.

''It was wonderful to see celebrities, businesses and charities get on board and creatively make #GivingTuesday their own.”