The number of people using the Trussell Trust’s foodbanks rose from 347,000 to 913,000 in a single year, the charity said today. 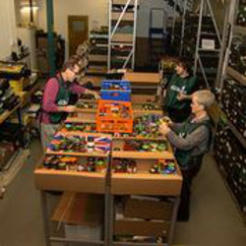 The number of people using the Trussell Trust’s foodbanks rose from 347,000 to 913,000 in a single year, the charity said today.

Half of referrals to foodbanks in 2013-14 were a result of benefit delays or changes, the charity said. And 83 per cent of foodbanks reported that they were seeing an increase in users because of benefit “sanctions” – where people are told they are no longer entitled to benefit after not complying with the rules.

Chris Mould, chairman of the trust, said it was shocking that the trust had helped “close to triple the numbers helped last year”.

“In the last year we’ve seen things get worse, rather than better, for many people on low incomes,” he said.

The charity said its own resources had been stretched by the difficulty meeting the growth in demand for its services.

The charity also heard today that it had received a grant of just under £1m to grow its network of food banks in Scotland.