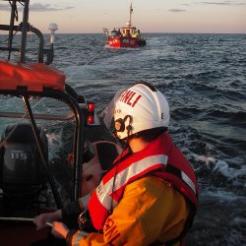 The RNLI said the increase was due to a small number of generous bequests, which took legacy income to an unprecedented £118.4m for the year. All other income sources were broadly unchanged from the previous year.

Total reserves also increased to £661m, up from £613m a year ago, though free reserves dropped slightly to £101.9m, equivalent to 11 months’ spending.

A spokeswoman for the RNLI said the balance sheet figure of £661.7m for total reserves could be “misleading”, as 55 per cent of this comprises operational equipment, including lifeboats, lifeboat launching equipment and lifeboat stations.

She said it also includes “a £10.6m endowment reserve, of which we can only spend the income; £100.6m of restricted reserves, which we can only spend as the donor directs; £101.6m of designated planned capital expenditure, earmarked for our lifeboats and lifeboat stations over the next three years, and £19m of pension liabilities.

“This leaves £101.6m of free reserves, available in an emergency.”

A wide range of cost-efficiency measures introduced in 2010 are now delivering savings amounting to more than £22m a year, the RNLI said in its accounts.

It said that continuous improvement and cost-reduction is now a “way of life” within the RNLI.

Capital expenditure increased by 35 per cent during 2013 to £48m, kick-starting a five-year programme which will see £310m spent on operational boats, equipment and properties. Total spending rose by £3.9m to £144.6m.

During 2013 lifeguards patrolled 19 more beaches than before and the RNLI plans to add a further 10 in 2014. The charity said it saved 425 lives throughout the year.