Relationship between government and charity 'has lost its way', says Nandy

There needs to be a rebalancing of the relationship between the voluntary sector and government, shadow minister for civil society Lisa Nandy said today. 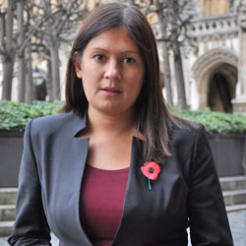 There needs to be a rebalancing of the relationship between the voluntary sector and government, the shadow minister for civil society Lisa Nandy said today.

Nandy was speaking at the High Impact conference this morning, organised by charity publication Third Sector in partnership with think tank NPC.

Responding to a question on charities’ right to campaign, Nandy said: “What is the proper relationship between government and charities? We have lost our way a little bit."

Earlier she said on the same issue that “we have started to get the balance very wrong.”

She warned that changes to campaigning laws introduced in the Lobbying Act could lead to “self-censoring”.

She said charities and government “need to restore the idea of additionality” and that charities and the private sector should not be “pitted against each other”.

“When we do work together it can be magic,” she said.

Rob Wilson, the recently appointed minister for civil society, accused Nandy of being “alarmist” over her comments about the Lobbying Act and said it had been introduced to improve “transparency”.

“Many charities are experts in their fields and it’s absolutely right that they should be raising issues with government,” he said.

Baroness Liz Barker, representing the Liberal Democrats on the panel, said that campaigning organisations like 38 Degrees had caused confusion, and said charities have to distance themselves from such organisations "by sticking to the objectives of their charity and being absolutely clear about the way they are going to pursue them”.