Charity chief executives are less trusted than lawyers, NHS managers and civil servants, a poll by Ipsos Mori has revealed. 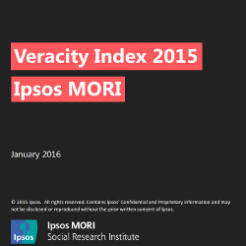 Charity chief executives are less trusted than lawyers, NHS managers and civil servants, a poll by Ipsos Mori has revealed.

Ipsos Mori conducted the interviews between 5 December 2015 and 4 January 2016.

Charity chief executives scored lower levels of trust than doctors (who topped the poll), hairdressers, the police, the ordinary man or woman in the street and pollsters. However, they scored above trade union officials, bankers, journalists, estate agents and government ministers and politicians generally.

Asheem Singh, director of public policy at Acevo, said: “Despite the public criticism faced by charities this year, trust in sector chief executives is holding up. We don’t take this for granted – but we should also take heart that the public who see the work we do on the ground each and every day continues to back us and our judgement over that of public sector managers, councillors, government ministers and politicians. We should move forward with confidence.”

Click on images below to see comparisons with other professions.