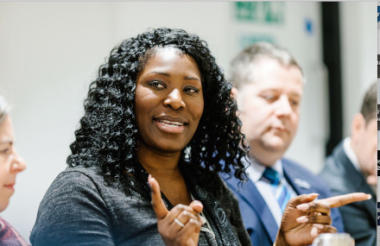 Ndidi Okezie was scrolling through Twitter when she came across an advert for her “perfect” job – chief executive of UK Youth.

“I clicked in and read the executive brief, and honestly, I just started laughing. You couldn't have described a more perfect role for me – it was almost as if it was a joke,” she says.

Okezie sent the brief to her sister and best friend. Her friend thought Okezie had written the advert and it “was a vision board and I was being really extra” Okezie laughs.

Six months in it is fair to say the role hasn’t been quite how she envisaged, but Okezie is adapting the charity to survive the pandemic.

Before beginning her role, Okezie did all she could do to get ready: “This was my dream job and I wasn't going to allow lack of preparation to get in the way of hitting the ground running.”

She says: “I did everything right. I took time off between ending my job and starting UK Youth, I read books, I had a hundred day plan, I had the checklist – I was ready to go.”

“It started off so well. I did my listening tours, I started meeting people, it was just going so well – and then reality hits in February,” Okezie explains.

In some ways she had to mourn her plan for the charity. “I had to grieve the loss of being able to have the start that I wanted in my first chief executive role,” she says.

“We suddenly went from an organisation that was stable, thriving and talking about investments, to suddenly needing to survive” once the pandemic hit.

While Okezie’s mandate was meant to be to grow the charity, she quickly had to close UK Youth’s outdoor learning centre, a big income stream, and furlough over 60% of her staff.

“People that were still getting to know me, suddenly now needed to trust me, virtually, and really believe that I was doing everything in my power to secure them” she says.

Now she is learning to see the pandemic “through a slightly different lens”. For example, she says that relationships that have been forged during the crisis would have taken far longer otherwise, and that it has accelerated collaboration and partnerships.

On starting her role, Okezie wanted to put all work “through the lens of people first”. She also laid out five core goals for the organisation.

When it comes to growing the evidence base, Okezie says “there's a bit of a bubble” around those who work in the sector, who “intrinsically understand the value of youth work”.

“You see it, you live it, you understand it, but I don't think we've given enough focus to the fact that if you're outside of that bubble, it is actually not as obvious as we might think,” she explains.

She says the youth sector must figure out ways of demonstrating the impact and difference its approach can have on young people.

Okezie does not want to make the work “heavily evidence laden” but says it does need to be “evidence-led”.

'It's not just sharing, it's embedding'

The purpose of the second goal is to share and help people improve their practice.

“We very intentionally added the word ‘embed’, and for me embed is a more intimate relationship,” she explains.

“There is something about what works that we have been struggling to understand how to scale, and I think it lies in this issue of embedding. How do you have an ongoing relationship with an organisation or sector where you help them translate the evidence into their practice? It's not just sharing, it's embedding,” she says.

Campaigning is an area that she is looking to grow moving forward, “which the pandemic has been an opportunity for”.

She thinks there has been “a huge cross-sector spotlight” on issues, and says “inequality has never had the spotlight that Covid-19 gave it”.

She adds: “It's very clear that without the #NeverMoreNeeded campaign, that £750m package was not coming. And yes, it wasn't the billions that we said we needed - but it wouldn't have come without that campaign.”

Therefore, Okezie says the pandemic has taught her what collective campaigning can do.

Okezie talks about the need for charities to tackle the digital divide. “All these talks about schools going online - if you've got three, four, generations in your household and one device, how is learning happening?” she asks.

“For me, none of the stuff that's come out of Covid-19 has been a surprise. It's the same issues that organisations and schools have been trying to bang the drum on around inequality. Those things have just been exacerbated, and they've been brought to light,” she says.

Nonetheless, Okezie thinks “there was a lack of confidence in what could go online” but this period “has challenged that”.

“I think that digital work has taken on some of the depth that it needed as a result of this. But again, the divide that exists has been illuminated. And the fact that we need to invest in effective digital strategies is also something that I think has come out,” she explains.

Okezie says “our work needs to be driven by voices that we have to go find, as opposed to those who come to us”.

Alongside organisations and activists including My Life My Say, The Diana Award, and Jermain Jackman, UK Youth recently launched the #YoungAndBlack campaign. It is a space to share, listen, and learn from the experiences of young black people.

She says: “For me, personally, I was just huddled in a corner for two days after seeing that video. There was the point for me where I was just exhausted emotionally, you just feel attacked over and over again.”

She began having conversations with other colleagues, “we were all struggling assuming that it was down to us to individually process our pain and process what we were thinking,” she says.

“I thought, hold on, wait, I am the CEO, I can do something about it in the organisation. And so my initial response was to create a space talk as an organisation,” she explains.

“I didn't mandate it,” Okezie says, and instead sent out an email saying let's get together and have a conversation.

Okezie says: “I don't know how many more reports or recommendations we need around race. There is something missing which is preventing those recommendations from being successfully implemented. And my naive contribution to that is that I don't know that we have real understanding yet. I don't think that we actually have a place of empathy and realisation on which solutions can be built.”

She adds: “I fundamentally believe in humanity. I believe in the goodness of people and I therefore believe that there is a lack of understanding and empathy.”

For Okezie, part of the problem has been a reluctance to admit that there is an issue with racism. She says: “How do you change something you don't acknowledge?”

“It is a taboo subject” she says, which is shown by “the anxiety it brings up for people to even have the conversation”.

But Okezie says UK Youth are now being “inundated” by people reaching out and asking what they can do.

“I am sure part of that is me being a black chief executive, so a lot of people are reaching out to me, but most people are scared to have this conversation. Good people, right people, kind people. And so there is something about this space that we still need to get comfortable being uncomfortable in, in order to see progress,” she says.

White people must wake up to the fact that their norms might not be the norm for everybody, and consider their role in that. “It is going from non-racist to anti-racist,” Okezie says.

If properly understood, “it then doesn't become the to do list, it becomes a fundamental commitment to the rights of everyone to experience the thing that you take for granted - that is the shift,” she explains.

Next steps for the campaign

“And so we do have a responsibility to figure out a way of elevating the conversation, and then helping that conversation lead to something sustainable,” she says.

Okezie adds that a lot of people have asked whether the campaign risks alienating non black people, or have commented that it is clearly a campaign of black people talking to themselves.

“The moment it is a spotlight on a minorities experience, it must be the minority talking to themselves. And just that in itself is just so problematic,” she explains.

UK Youth is now hosting those conversations, and there are events that are coming out of the conversation and the campaign of bringing people together.

“We think there's more we can do around that,” she says, but “this was designed to get the conversation going, and it's snowballed into something much bigger”. Therefore the charity would need support and funding to sustain it.

For Okezie, there is power in collaboration. “I think the reality is, yes, collaboration is difficult,” she says, but “creating that crossover, creating more awareness, understanding, collaboration, is game-changing”.

She concludes: “I do think there is an appetite in the sector, and definitely demand from outside of the sector, to think from a holistic strategic perspective. And that for me is what UK Youth needs to focus on doing. That for me is growth, that is us doing things in a different way with new partners.” 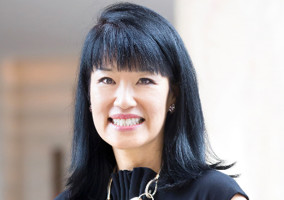 Su-Mei Thompson, chief executive of Media Trust, speaks to Harriet Whitehead about the need for charities to have a digital focus, the impact of Covid-19 and enhancing media representation of marginalised communities 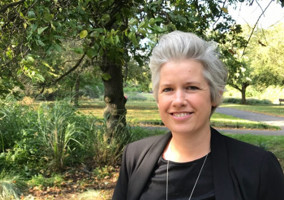 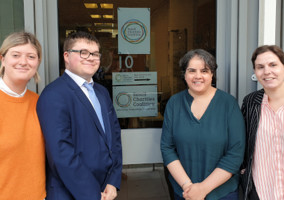