JustGiving has been moved to defend its fee structure after calls for the site to waive its commission on donations made to Stephen Sutton's appeal, which has reached nearly £4m. 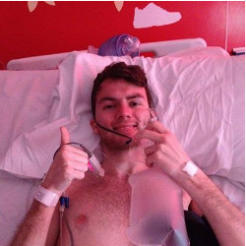 JustGiving has been moved to defend its fee structure after calls for the site to waive its commission on donations made to Stephen Sutton's appeal, which has reached nearly £4m.

In a blog posted today, Anne-Marie Huby, co-founder of the site, said she wanted to put the record straight after an article in the Metro “got its facts so badly wrong”.

The newspaper wrote a story claiming that the platform stood to make £180,000 from the £3.7m fund.

It quoted tweets criticising JustGiving and calling for its fee to be donated to the Teenage Cancer Trust, the charity benefitting from Stephen's appeal.

But Huby said in her blog that JustGiving is receiving less that a quarter of the £180,000 after it made a donation of £50,000 to the page earlier this month and the volume discount received by the Teenage Cancer Trust.

JustGiving charges a fee of up to 5 per cent on donations.

Huby said the site has helped raise more than £1.8bn since its launch nearly 14 years ago that would not be possible without charging a fee on donations, which is reinvested into making the site bigger and better.

Her blog quotes Siobhan Dunn, chief executive of the Teenage Cancer Trust, saying: “JustGiving has played a key role in enabling so many people to donate to Stephen’s Story.

“To date, over 166,000 donations have been made with many thousands happening at the same time. JustGiving increased their server infrastructure to unprecedented levels to keep the site up and running. Our own online systems are not built to cope with such incredibly high volumes of donations.”

Stephen died on Wednesday from bowel cancer. The 19-year-old launched a social media campaign to raise money for the Teenage Cancer Trust as part of a “bucket list” of things he wanted to achieve before he died.

Tributes and donations have continued to pour in since his mother, Jane, announced that he had died peacefully in his sleep at Birmingham hospital.