Islamic Relief UK has launched a Ramadan campaign on buses across the country to help change the “negative climate around international aid and around the Muslim community in this country”. 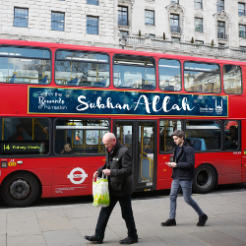 Islamic Relief UK has launched a Ramadan campaign on buses across the country to help change the “negative climate around international aid and around the Muslim community in this country”.

The campaign will see advertisements across buses in London, Manchester, Leicester, Birmingham and Bradford with the strapline “Subhan Allah”. The phrase means “Glory to God” in Arabic.

The adverts ask Muslims to donate generously during Ramadan. Islamic Relief UK said it has a fundraising target of £11m for Ramadan, with the expected cost of the advertising campaign being less than 1 per cent of this.

Imran Madden, UK director of Islamic Relief UK, said: “In a sense this could be called a climate change campaign because we want to change the negative climate around international aid and around the Muslim community in this country. International aid has helped halve the number of people living in extreme poverty in the past 15 years, and British Muslims are an incredibly generous community who give over £100 million to international aid charities in Ramadan.”

“The Cakes for Syria initiative we run during Ramadan gets very little media attention but it’s a great example of what our organisation is all about – over a thousand young volunteers selling and delivering cakes all over the country at a time when they are spending long days fasting, because they want to make a positive difference for those affected by the Syrian conflict. This project has raised over half a million pounds in the past three years.”

The bus campaign will launch on 23 May in cities with large Muslim communities. It will feature on 180 buses in London, and 460 more in Birmingham, Manchester, Leicester and Bradford.

Madden said: “Our Ramadan campaign will heavily feature the word ‘SubhanAllah’, which means ‘glory to God’. We want to celebrate the fact that extreme poverty has been halved and give thanks for the opportunity that Ramadan provides to give generously in support of people in need.

“We have chosen bus advertising because it allows us to put our message across cost-effectively to a wide cross section of people. This campaign is about raising awareness as well as raising funds. We hope it will be received very positively because we have a positive message to share.”