Fundraising Live: ICO says it does not ‘pick on charities’ 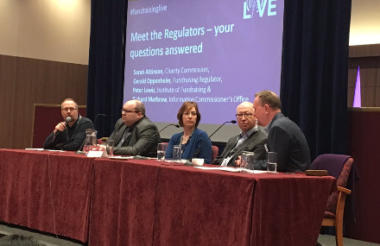 Charities have not been unfairly targeted by the data regulator, Richard Marbrow, group manager for corporate governance at the Information Commissioner’s Office, told delegates at Fundraising Live yesterday.

Marbrow was taking part in the Meet the regulators panel discussion alongside Sarah Atkinson, director of policy and communications at the Charity Commission, Gerald Oppenheim, head of policy at the Fundraising Regulator and Peter Lewis, chief executive of the Institute of Fundraising.

He was responding to a question from the floor about whether other sectors would be held the same standards as charities.

At the end of last year the ICO fined the British Heart Foundation and the RSPCA for breaching the Data Protection Act. Earlier this month it issued notices of intent to fine 11 others.

“We don’t pick on charities,” Marbrow said: “We hold all sectors to the same standards.” But “in the action we have taken we have recognised the status of charities”.

He said that “actually the fines were dramatically reduced because it was charities”.

Marborw also told fundraisers that the relationship that charities have with donors is “radically different” from the one that other sectors have with consumers because you don’t buy a donation.

Is the sector more prepared?

Panellists were also asked if the sector was more prepared to deal with criticism than it was in the summer of 2015, when several charities were criticised in the media for poor fundraising and data processing practices.

Oppenheim said: “I don’t know if anyone is ever actually prepared for what the newspapers may come out with. Unfortunately everybody has had a lot of experience dealing with it now.”

Atkinson added that trustees are “more engaged” now and understand the importance of knowing what is going, but said there is still ways they could improve.

Lewis said that the way the sector responded this week to the Daily Mail’s attack on JustGiving was an example of the sector “coming together” and said it was noticeable that it wasn’t “just umbrella bodies leaders coming out in defence”.

He added that initiatives like yesterday’s #CharityToday were a good way to “tell positive sorties about how charities are improving communities”.

Marbrow said it was really important to “tell people what you are doing with their data” because the problems happen “when somebody else tells them and they are shocked”. This means “you have already lost the chance to explain why you are doing it”.

For full details of Fundraising Live 2017, including the programme and a round-up of news and videos from the event click here. 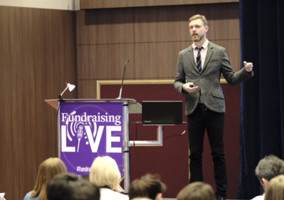