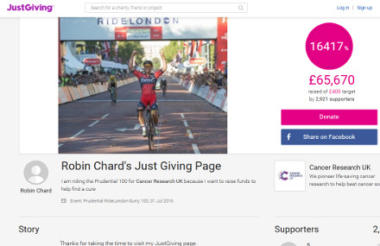 A cyclist who died while raising funds for Cancer Research UK has raised almost £50,000 for the charity on his JustGiving page since his death yesterday.

Robin Chard, 48, survived cancer earlier in his life but died while taking part in Prudential Ride London to Surrey. He suffered a cardiac arrest during the event and died later in Kingston Hospital.

On his JustGiving page, Chard said the event was “a bit of a personal crusade” after losing several family members to the disease on top of his own battle.

Ed Aspel, executive director of fundraising and marketing at Cancer Research UK said the charity was “incredibly thankful to everyone who has donated to his fundraising page in his memory”.

“Robin and his family had sadly been affected by cancer which is why he chose to fundraise for Cancer Research UK. These generous donations will help fund our pioneering work into the prevention, diagnosis and treatment of cancer, helping us to achieve our ambition of bringing forward the day when all cancers are cured.

"We send our sincerest condolences to the family of Robin Chard.  We are very grateful that he chose to cycle in RideLondon to support Cancer Research UK, and would like to express our deepest sympathy to his loved ones at this difficult time.”

In 2012, 30-year-old Claire Squires died running the London Marathon in aid of the Samaritans. A JustGiving page set up in her memory by her mother – which is still open for donations – has raised a total of £944,237 to date.

Her mother wrote: “Over 80,000 kind donations were made through this fundraising page in the year after Claire’s death. The funds raised will be used in a special way, as a lasting tribute to my daughter, and will support Samaritans’ projects that would have been of interest to her, reflecting her inspiration and personality.”

Another runner, Robert Berry, who died just after finishing the London Marathon in 2014, raised £77,258 in aid of the National Osteoporosis Society.