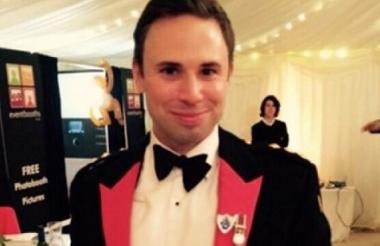 Tribute donations for army captain, David Seath, who died on Sunday while completing the London Marathon, have reached a total of £138,306.

The donations on his own JustGiving page stood at £200 the day before his death but climbed to almost £58,000 within hours of the day’s events. A separate page set up by friends and colleagues who plan to walk the last stretch of the marathon to “complete what he started, in his honour”, has raised £80,306 so far.

The 31-year-old died after suffering a cardiac arrest less than four miles from the finish line on Upper Thames Street.

A statement by Help for Heroes co-founders, Bryn and Emma Parry today said they were “devastated by the news” of Seath’s death.

“David was doing something extraordinary by running the London Marathon to fundraise and support his fellow soldiers who have suffered life-changing injuries and illnesses,” the statement said. “Help for Heroes sees every fundraiser as one of Team H4H and we are devastated by the news. Our thoughts and prayers are with his family, his regiment and his friends.”

On Seath’s own JustGiving page, he said he was supporting the charity because the “forces community need our continued support”.

His friends wrote that it was a “cause he ran and died for”.

“He was our friend and hero. Please share this page far and wide,” they said.

In 2012, 30-year-old Claire Squires died running the London Marathon in aid of the Samaritans. A JustGiving page set up in her memory by her mother – which is still open for donations – has raised a total of £944,237 to date.

Her mother wrote: “Over 80,000 kind donations were made through this fundraising page in the year after Claire’s death. The funds raised will be used in a special way, as a lasting tribute to my daughter, and will support Samaritans’ projects that would have been of interest to her, reflecting her inspiration and personality.”

Another runner, Robert Berry, who died just after finishing the London Marathon in 2014, raised £77,528 in aid of the National Osteoporosis Society.