The Charity Commission has cleared George Galloway’s Viva Palestina appeal of having links to Hamas, but has criticised several aspects of the way it has been run. 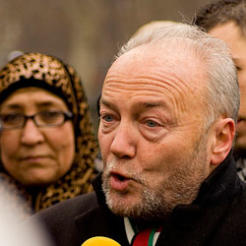 The Charity Commission has cleared George Galloway’s Viva Palestina appeal of having links to Hamas, but has criticised several aspects of the way it has been run.

Last year, the Charity Commission opened an inquiry  following concerns over the financial governance of £1m that the appeal said it had raised for aid in Gaza.

The Commission today said it found no evidence that the charity’s property or money was provided to Hamas, which is considered a terrorist organisation by the US and the EU, with Galloway confirming he had handed over £25,000 in cash to Hamas but been very clear that it was ‘personal money’ rather than the charity’s.

However, the Commission concluded it was misleading to the public for Viva Palestina to claim on its website to have raised over £1m for relief in Gaza, as the inquiry found it had only raised £180,000.

The Commission also found that the attempt by founding trustee Mr Al-Mukhtar to amend the purposes of the charity, so it could be a non-charitable organisation, was not legally effective.

Viva Palestina was registered as a charity in April last year, though Al-Mukhtar maintained it was not intended to be a charity and should not be subject to the Commission’s jurisdiction.

The charity's two founding trustees, including Al-Mukhtar, have resigned, and two new trustees have now been appointed.

Further, the Commission said the charity’s founding trustees had exposed charitable funds to risk through its colloboration with non-charitable organisation North Manchester Against Wars (NMAW).

Both charities worked together on a Gaza appeal, with Viva Palestina putting £90,000 into an account held by NMAW.

In March, the Commission restricted the NMAW account and ordered the funds to be transferred back to Viva Palestina as soon as possible.

Viva Palestina, however, did not have an operational bank account, as trustees had failed to administer the account with the Islamic Bank of Britain correctly, leading to it being frozen.

The Commission urged the charity to open a new account, which it did in November of last year.

The Commission concluded that a lack of written agreement with NMAW and lack of communicaton had exposed funds to risk and amounted to mismanagement in the administration of the charity.