Both individual and organisational membership of IoF has grown in last 12 months, says Peter Lewis

The chief executive of the Institute of Fundraising has said that both individual and organisational membership has grown in the last 12 months, despite the uncertainty over the future of fundraising self-regulation. 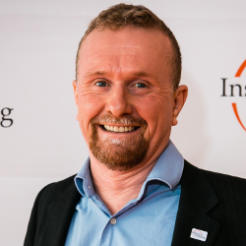 The chief executive of the Institute of Fundraising has said that both individual and organisational membership has grown in the last 12 months, despite the uncertainty over the future of fundraising self-regulation.

Lewis said that he was “delighted” by this increase, given the “very difficult external environment” in which the sector has been operating over the last 12 months.

“It’s been a time of change for the Institute, in a very difficult external environment we are delighted that we have in fact been growing.

The IoF has since confirmed that it now has 5,700 individual members and 475 organisations.

Lewis also said that the IoF has been working with a number of sector bodies to help produce “toolkits” for the trustees of fundraising organisations to better understand the changing self-regulatory landscape.

Dunmore: ‘a regulator in the spirit, not the letter of the law’

Stephen Dunmore, interim chief executive of the Fundraising Regulator, also said that he envisaged his organisation as being a regulator “more in the spirit of the law, rather than the letter of the law”.

Dunmore, who was also speaking at the same event in London yesterday, was giving an update on the progress that the Fundraising Regulator has made as it moves towards taking over from the FRSB in the early summer.

He said the Fundraising Regulator wants to work with the IoF, with the wider sector and with other membership organisations to embed best practice and to help instil a cultural change in fundraising. “We will be values-driven and we will support charities to make the necessary changes. To sum up: it’ll be about the spirit of the law, rather than the letter of the law."

He said that all too often in the past charities would “argue the toss in minute detail” with the FRSB and with lawyers about conclusions that had been reached. “That is not in line with the spirit of the law,” he said. “And obviously charities' membership fees were then paying for the FRSB to engage lawyers to counter what was being put to them by charities.”

Dunmore also questioned whether or not the Information Commissioner’s Office might have jumped the gun in signing up charities to opt-in undertakings, given the looming EU regulations on data protection.

"Without wanting to be critical, I think the ICO has jumped the gun with charities as we don't know what the EU data protection laws will look like."