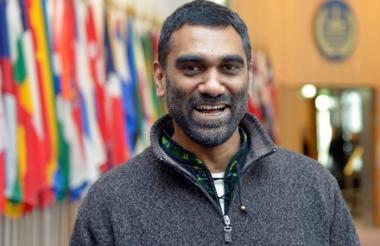 Amnesty International’s secretary general Kumi Naidoo has resigned from the human rights NGO for health reasons, after a year and five months in the role.

Full responsibilities were handed over to deputy secretary general Julie Verhaar yesterday (5 December) after his resignation was accepted by the international board.

Verhaar takes up the role of acting secretary general with immediate effect until a replacement is recruited.

Naidoo said: “I have long considered Amnesty International as one of humanity's most important global assets, and it is with a heavy heart that I have taken the decision to step down from my position.

“Now more than ever, the organisation needs a secretary general who is fighting fit and can see through its mandate with vitality that this role, this institution, and the mission of universal human rights deserve.”

Naidoo had a pre-existing medical condition which has worsened in recent months, and took the decision to step down following medical advice.

He said: “It has been a huge privilege to have worked with our excellent and committed staff and volunteers at the international secretariat as well as with our sections. [These include 70 independent charities for Amnesty International, in various countries, which carry out work determined by the International Secretariat, which is based in London].

“I have been inspired by the important and courageous work being done by our movement. But due to my health, I have no choice but to take this painful decision and step down.

“I need to recover my health and figure out a more sustainable way to continue to contribute to the struggle for justice in the future.”

Naidoo plans to honour longstanding commitments in his capacity as outgoing secretary general this December, as his health permits.

He intends to follow a phased transition by stepping down in January, when he starts a period of medical leave.

Naidoo joined Amnesty International in August 2018, taking over from Salil Shetty, who had led the organisation for eight years. The appointment was made in December 2017.

Roz McGregor was an intern at the International Secretariat and based in Geneva; she also took her life in 2018.

Shetty commissioned the KonTerra Group to review staff wellbeing, and a report was published after Naidoo succeeded her, in January 2019.

The report included staff surveys, employee interviews and a review of current practices, procedures and policies.

He added: “We always knew that the complexities of our organisation and the nature of our work pose particular challenges to managing stress and wellbeing, and I note with concern that they have been visible in the organisation for many years.”

Work is ongoing at Amnesty International to implement recommendations and lessons from the review.

The charity announced in May that five of its seven senior leadership team would be made redundant after a change in strategy, and Naidoo said then that a coalition team would lead from November.

After a proposal to disestablish 146 roles in a consultation paper published in June, Amnesty International concluded in September that there would be 20 compulsory redundancies.

A statement then said these were necessary due to harsh financial realities and the need to put the secretariat onto a more stable footing for the future.