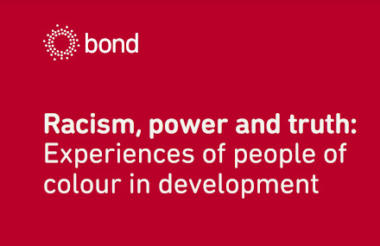 Some 89% of respondents feel their international development charity is not truly committed to diversity, equality and inclusion, according to a Bond report.

The report, Racism, Power and Truth: Experiences of people of colour in development, was published by Bond yesterday. 150 people of colour across a number of UK NGOs responded to a survey. 77% of respondents were in the UK and 23% were outside the UK.

Nearly three-quarters, 73%, reported having diversity and inclusion policies in place.

Nonetheless, the majority of respondents, 68%, said that they had experienced an incident of racism in the workplace within the past year or had supported someone else who experienced a racist incident.

“Many of these examples were incidents of overt racism, causing considerable psychological harm and mental health challenges for those affected. In some cases, employees were made to continue working in environments in which they felt unsafe,” the report states.

Only 11% of survey respondents strongly agreed that their organisations were committed to working on diversity, equity and inclusion.

The report also reveals that 85% of respondents felt that as a person of colour, getting promoted in the sector was not accessible to them. It found promotion was seen as a reward only accessible to people from non-minoritised groups.

Researchers identified ways in which women of colour, particularly those working for UK NGOs in low-middle income countries, are systematically marginalised and prevented from progressing their careers.

Lena Bheeroo, lead author of the report and engagement and equity manager at Bond, said: “Our report provides evidence for what we have known for many years now. Across the UK NGO sector, people of colour are underrepresented in senior roles, and that they are facing multiple barriers to career progression, with the odds stacked against them.

“For a sector that is working to champion people’s rights, fairness and equality, this is a big problem. Organisations must not shy away from speaking about racism and anti-Blackness. They have the responsibility to move beyond diversity in just HR terms, towards making better staffing decisions that better represent the countries and contexts that we work in.”

Bheeroo added that chief executives and board members “should commit to sponsoring people of colour by investing time with them, opening doors, bringing them into existing networks and championing them publicly”.

“On an individual level, people need to reflect on their levels of privilege and power and their position within the sector, so that they can start to take steps to disrupt the dynamics at play,” Bheeroo added.

The report makes several recommendations and states that the sector must adopt “an explicit anti-racism lens and practical action” to make change.

“The sector’s predominant, one-size-fits-all approaches to diversity and inclusion are failing,” it adds.

The recommendations include starting processes to end inequitable pay scales between roles in lower-income and higher-income countries.

Other recommendations include auditing organisational policies with an intersectional lens and not shying away from “publicly discussing how racism and anti-Blackness manifests in your organisation”.