What to do when the law lacks teeth

Andrew Chaggar is on a journey of discovery and growth as he turns his attention to building a sustainable governance structure in his disaster relief charity. He shares his latest lessons about the limitations of law. 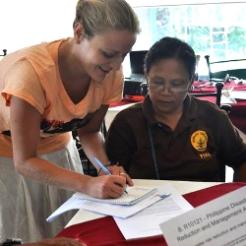 European disaster volunteers work with local partners in the Philippines

Andrew Chaggar is on a journey of discovery and growth as he turns his attention to building a sustainable governance structure in his disaster relief charity. He shares his latest lessons about the limitations of law.

I recently read a report about the Philippines by the Internal Displacement Monitoring Centre (IDMC).  While this report focuses on Tropical Storm Sendong, which struck the southern island of Mindanao in 2011, its findings are also relevant to our charity’s own Disaster Risk Reduction (DRR) work in Manila and to development work in general.

The Philippines has long been recognised as one of the world’s most disaster prone countries. Located on the western edge of the Pacific it is frequently hit by both typhoons and earthquakes which bring flooding and landslides. In 2011 the country was struck by 33 natural disasters. This was the greatest number recorded in its history and more than any country worldwide that year.

In response to this overall vulnerability the Philippine government has taken several important steps. The IDMC report describes how the country’s 2009 Climate Change Act was quickly followed by the Disaster Risk Reduction and Management (DRRM) Act of 2010. These national laws were designed to complement each other and also related international agreements, like the UN’s ten-year “Hyogo” plan to reduce disaster risk. According to the IDMC, the Philippines is now seen as “a global leader in enacting legislation related to disaster risk reduction”.

These are very positive developments in such a disaster prone country, and the Philippines should be applauded for recognising not only the links between climate change and disaster risk, but also the need for proactive, rather than reactive, solutions. Sadly however, the IDMC report also highlights how creating laws is not the same thing as enforcing them.

Even though Sendong struck soon after the 2010 DRRM Act was passed the disaster revealed numerous failures to meet even its immediate provisions. For example evacuation plans were often not developed or implemented and as a result the loss of life was much worse than it might have been.

One of the main reasons identified for such failings is that many responsibilities were devolved from national to local government units who often lacked the capacity, or political will, to enforce related laws.

The IDMC report contains many lessons, including the need to build the capacity of local government. However, what stands out to me is the repeatedly-stated importance of civil society organisations, and of affected communities themselves, in helping to fill service gaps and in holding local officials to account.

I suspect that the importance of engaging civil society in this way will not only ring true to others working internationally, but also to many based in the UK.

For our part, these findings are especially relevant to our own efforts in Manila. All of our work here is being undertaken in partnership with a People’s Organisation whose membership consists of disaster affected, and at risk, local residents. Having suffered multiple floods over the years they have long understood the importance of helping themselves and have successfully undertaken many of their own risk reduction and response projects.

For example, the flood rescue boat project I mentioned in my last blog was initiated by our partner many years ago.  These boats are distributed to trained residents and when disaster strikes our partner helps coordinate community evacuations.

These efforts have saved many lives and are a great example of how civil society can contribute towards fulfilling national goals. However, challenges remain. Many small organisations, like our partners, are well placed to deliver vital services, but their efforts can be constrained by a lack of resources. In the case of our partners, their boat programme is limited to a small geographical area.

As a result our focus here is to support our partner’s existing efforts rather than to establish our own projects.  There are many ways we’re doing this, such as by finding sponsors for more boats, but it’s not just about money of course.

Our partner’s efforts are also sometimes limited in terms of skills and, as most of their members are also volunteers, also by time. For example, several of our partner’s members previously received basic legal training in order to understand and advocate for their own rights.

However, they’d been unable to invest the time to update themselves on the recent legislation. Recently however a lawyer volunteered with us and performed the in-depth research needed to bring our partner’s paralegals back up to speed so that they can now continue their work.

Overall then, while governments need to take a lead, both in DRR and in development generally, laws and policies are never going to be perfect. As a result local organisations, and people themselves, have an equally important role to play that needs to be recognised and supported.