Using technology to save lives 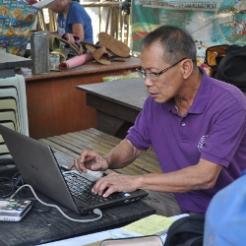 It’s the middle of July and in the Philippines that means we’re approaching the peak of rainy season.  It’s raining almost every day now and more often than not we get a torrential downpour for at least an hour or two. Even after a fairly short burst of rain many of the local roads are under a couple of inches of water and I can’t imagine what they would look like after a typhoon. Every rainfall is a reminder of the risks faced by the people who live here.

The biggest flood in recent years was caused by typhoon Ketsana, which struck in 2009. During a 24-hour period Ketsana dumped over 450mm of rain on Manila and killed almost 750 people across the country.

The rains have now returned, and no one knows if 2013 will bring a repeat of last year or, worse still, of 2009. We’re seeing the worry on the faces of our partners. They’re often tired after restless nights of rain. With the memory of Ketsana, and of more recent floods, still fresh in people’s minds it’s no surprise that the rain hammering on tin roofs keeps them awake.

During heavy rains people try to keep themselves abreast of the threat level by watching the height of the water in a nearby river.  Several years ago the local government painted a depth gauge on a bridge and this enables anyone passing by to understand the current level of danger.  If the river exceeds a certain height then it’s time to evacuate and seek safety.

Of course, the river level can rise quickly, particularly during very heavy rain, and it’s not practical for everyone to be watching the river at all times. As a result people need some sort of way for updates on the river’s height to be quickly distributed to those at risk.

Our local partner, a group call Buklod Tao who I introduced in my last blog, soon realised that text messaging was an ideal way to do this. Over the years they’ve developed a system where designated “river watchers” monitor the river’s height and send SMS updates to Ka Noli, the president of Buklod Tao. Ka Noli then forwards these messages to others in the community as well as to partner organisations who can supply help in an emergency situation.

Ka Noli also uses text messaging to communicate with Buklod Tao’s response teams. These teams are equipped with flood rescue boats, which I introduced in my April blog, and Ka Noli forwards on SMS reports of trapped people to the team leaders who can then respond and report back.

This is a great example of how mobile technology can help save lives in an emergency but one problem we noticed when we first arrived was the burden this work placed on Ka Noli.  He’s just turned 65, wears glasses and uses a very old “dumb” phone.  As a result, he was struggling to read and manually resend literally hundreds of SMS messages one by one. The work was tedious, tiring, and slower than it needed to be.

So, one of the first things we did when we arrived in the Philippines was introduce Ka Noli to a system called FrontlineSMS.  FrontlineSMS is a free, open source programme which can turn any computer equipped with a GSM modem and local SIM card into a mass messaging platform.

The system is pretty intuitive and anyone who uses email can get their heads around FrontlineSMS. As a result Ka Noli was able to start using the system independently after a couple of tutoring sessions.  This has helped in a number of ways as he can now read and write messages on his laptop, rather than via the tiny screen and keypad on his phone.  He’s also been able to set up text “groups” so that he can send the same message to large numbers of people at the same time rather than individually.

Of course, with the ability to text literally hundreds of people simultaneously one of the things we’ve also had to think about is the associated cost. Happily the Vodafone Foundation were recently able to help us out in this regard through an introduction to Smart Communications, which is the largest mobile phone network in the Philippines.

Following a meeting last month, where we demonstrated FrontlineSMS to their corporate social responsibility team, Smart generously donated enough credit for Ka Noli to send unlimited texts for the next four months.  This should easily see him through the current rainy season during which time we’ll be able to demonstrate the system in full use and hopefully attract even more support.

So, while we can’t stop the next typhoon from hitting our local community, hopefully people will sleep a little more easily knowing that vital information is now only a text message away.