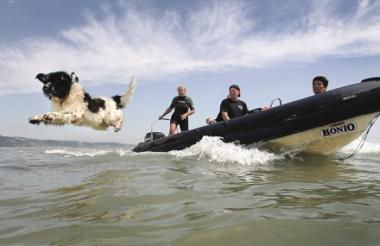 You too can be rescued by a dog for charity

Happy Friday, dear readers. We have reached the end of a week where the man who milkshook Nigel Farage has successfully crowdfunded the £520 costs he was ordered to pay the country’s leading Brexiteer. For more of Society Diary’s charity-related highlights, read on.

Diary needs rescuing! And now more than ever because Diary is donning an orange tankini to ‘get wet and save pets’ in a fluffier version of Baywatch at PDSA’s Big Doggy Paddle.

Diary’s favourite reader The Hoff will be played by a 13-stone Newfoundland dog, Diary will be bringing the inflatables and Scooby Snacks.

Let Diary explain. Vet charity PDSA is making an all-canine version of Baywatch. But what it is proposing is just as odd.

The charity is holding a fundraiser at Portishead Marina in September where members of public will be “rescued” by a dog in exchange for a donation to the charity.

So you pay a few hundred quid, pretend to drown in an outdoor pool in September, then a dog swims over to you and gives you a lick.

Not what Diary would call a relaxing early autumn afternoon, but if that’s what the kids are into these days, then fair play to the charity for raising money for a good cause out of them.

To infinity and beyond… for charity

Like every child of the 1990s Diary is incredibly excited about the latest instalment of Toy Story, and in an excellent development there is enough of a charity angle to the story that will justify a screening of Toy Stories 1,2 and 3 chez Civil Society Media this afternoon.

To mark the release of Toy Story 4, eBay UK and LadBaby have made Buzz Lightyear’s dream come true and literally sent him into space and have celebrated Buzz’s return to earth with an auction to raise money for Together for Short Lives. So far it has raised just over £1,000.

LadBaby’s video documenting the adventure is truly epic and worthy of the franchise.

Diary’s only concern is that Buzz may be disappointed in his new home if there is not enough excitement. With endless discussions over topics as such as SORP governance changes at CSM Towers, maybe we’ll have an office whip round and make a bid ourselves.

We are all Boris Johnson’s drawings now

Diary groaned when it saw another news story headline regarding Boris Johnson and a bus – but then it was relieved to see it was actually about a drawing he had done for charity.

Yes, the country’s top politicians and slebs this week contributed their own doodles (of varying effort and quality) to be auctioned for Midlands charity the Anna Wilkinson Mockingbird Trust today in Worcester.

Diary has always thought you can tell a lot about someone’s personality by their sketches, so let’s have a look at what’s on offer.

The worst drawing by far is by housewives’ favourite Richard Madeley, whose “Spitfire” looks more like a blob fish.

Miranda Hart’s “stick person” lacks ambition, but she offers the self-deprecating comment “I can’t draw, can you tell?” to win favour with judges (Diary).

Diary’s award for best doodle is a close thing between Vic Reeves/Jim Moir’s psychedelic self-portrait and Ainsley Harriott’s “Carrot!”, which edges it for use of colour and exclamation.

As for the politicians, Theresa May’s “shoe” is mediocre, although she gets credit for trying to draw from her blossoming personality. If she’d have done a “field of wheat”, she could have been in line for top marks from Diary.

Oh Jeremy Corbyn’s “Eternally happy cat” is probably the most technically proficient of the politicians’ entries.

But Diary is sad to say that the winner has to be our country’s next leader Boris Johnson. He wins points for putting in the hard graft of not only drawing a bus (with the Os of “London” as its wheels) but sketching 10 passengers aboard it.

And perhaps Diary was moved by the realisation that we are those passengers on BoJo’s bus, reader. But where is headed, we don’t yet know. Let’s just hope Boris’s entry next year isn’t of a bus on fire or falling down a cliff. 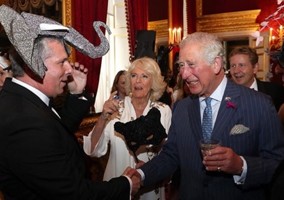 Society Diary: A new leader, a meeting of elephants and hackers rebuked 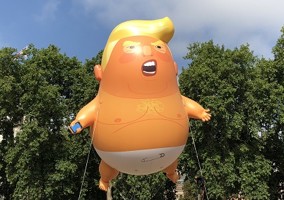 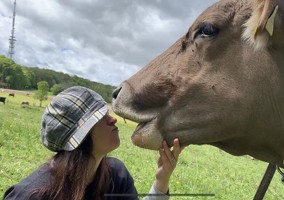 Society Diary: Kissing cows for charity is the latest trend