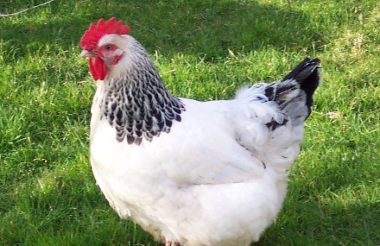 This humble hen has become un-eggs-pectedly popular during lockdown

Happy Friday. This week we bring you important news about chickens, an update of sorts on the Kruger report (still MIA), fashion updates, and all of this has been done “at pace”, a skill Diary will need if it fancies applying for a job at whatever the Big Lottery Fund is called now.

We all know that many charities have faced increased demands during the pandemic, but Diary was slightly surprised to see that chickens were playing a part in this.

According to the BBC, chicken rehoming charity Fresh Start For Hens received more than 52,000 requests for chickens since the start of lockdown. At the peak it was getting 4,000 inquiries a week and for the first time it has had to bring in a waiting list.

So, what caused this sudden surge in interest? Apparently, it was mainly due to shops running out of eggs in the early days of the lockdown.

Yes, people who fell “fowl” of panic buying thought it would be an “eggs-cellent” idea to get a chicken during “cluck-down”.

(It had taken all of our willpower to get this far without a chicken-related pun. Our resolve quickly crumbled when we saw on the charity’s website it had launched a “cluck ‘n collect” service to enable it to adhere to social distancing rules.)

All poor wordplay aside, the charity does great work saving chickens that had been used to commercially produce eggs. Once they reach the age of 72 weeks, a chicken’s egg-laying tends to drop off slightly, so they are slaughtered. The charity acquires these birds shortly before they reach that age and finds them new homes.

Diary is reliably informed that chickens also make great pets and there is plenty of space in the office now our colleagues are working from home. Where’s that waiting list?

Now we all love a bargain, but sometimes pre loved clothing comes at a price - especially when one of our Hollywood faves has worn it before.

Indeed, Spanx founder Sara Blakely bought the black pants that Olivia Newton-John wore as Sandy in Grease for $162,000, while Kim Kardashian paid $65,625 for a velvet jacket worn by Michael Jackson.

Diary has now heard that there is a new kid on the block selling their clothing for charity.

Sam Cam’s electric blue dress as well as her husband’s tie, will be up for grabs. The clothing is expected to go for a cool £42,100 to £61,800, based on Christie’s estimates.

“Where can I get my hands on it?” I hear you ask. Bids can be placed from 11am on Friday, until the hammer goes down on 15 September - may the best Diary devotee win.

An update on the Kruger review – just kidding

Diary, like a lot of people in the charity sector, is eager to learn what is actually in Danny Kruger’s report for the Prime Minister about putting charities at the heart of building back better. This is politics in 2020 and the whole thing has basically been conducted via Twitter, so it seemed apt that it was a tweet that alerted Diary to Danny K’s appearance on Times Radio with Matt Chorley to discuss said review.

Alas we did not get any answers, largely due to the fact the interviewer clearly had no idea that the report has already been submitted and is probably being used as doorstop at Number Ten. This meant the crucial questions went unasked. What was in the report? And what will happen next?

Even when given an opening to correct this assumption, “will you put that in the report?”, Danny K responded with a politician’s deflection, rather than clearly state: “Actually, I submitted the report a while ago”. Is he embarrassed that no-one has read it yet? Or is he unhappy with that an algorithm has downgraded it and is trying to appeal?

There were a lot of waffle, sorry warm words, about communities and volunteers, and a tenuous, even by Diary’s standards, link between Brexit and the surge in volunteering.

Danny K did offer some insights about how to get more cash to charities, but conspicuously failed to include the government in his list of those who should give more. His targets are the super rich, who really are very bad at giving money away (maybe this is why they are super rich) and crowdfunding – that’s a Thing.

Then there was some discussion about Big Society (as if the charity sector does not have enough problems right now, media and political types will not let this idea go), a chat with a very eager volunteer (who is now under the impression his words will be included in the ALREADY SUBMITTED report) and some stuff about A-levels.

Looking for a new job?

Finally, Diary has done all sorts of jobs over the years. Kitchen washer-upper, pint-pourer, easily-overwhelmed reporter. So we were delighted to see a new opportunity while wasting our life on Twitter: our friends at the National Lottery want some strategic communications advice.

Let’s see. Good writing skills? (Reader, you be the judge of that). Two years of experience? (Did I mention all those long nights washing up?) And … the ability “to work at pace”.

At pace, eh? So far the lottery have met the challenges of Covid-19 by promising to do all sorts of things “at pace”. That is how they will spend cash. It is even how they are “making sense of what we’re seeing and hearing”, apparently. Their boss in Whitehall promised parliament he was very pacey too. Now – happy days – we are going to get the same from their tweeting.