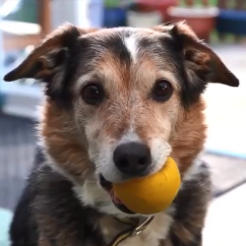 Why are they making me do this?

Get some dub on the woofer

Anyone who has ever owned a dog has, at some point, 100 per cent, without a doubt, wondered what he or she would say if it – the dog in question – could speak.

And yet, are we not all of us want to wonder from time to time? Is the human mind not finely calibrated towards dreaming impossible dreams? And, perhaps most importantly, is April not National Pet Month? The answer to all three of those questions, dear readers, is yes.

So fear not. No longer will you have to study for years in the mystic east, or labour like Doctor Doolittle, subject to the warp and, er, woof, or merciless fate, to comprehend canine conversation, pooch prolixity, and mutt mutterings. The Dogs Trust has done it for you, with an app called Doggy Dub.

So Dogs Trust has released an app. It's intended to...

No, there's no point faking. Diary has no idea why they've done it, really. There were talking dogs and we lost interest there.

Let's guess. It's funny making dogs talk. You can join in. Be nice to dogs. Oh, and give the Dogs Trust some money.

Anyway, admen have known for years what dogs woulds say if they could talk. It is, obviously, "sausages".

Sticking with the the pet theme, here's an example of pure nonsense involving cats. Paw nonsense, as it were. 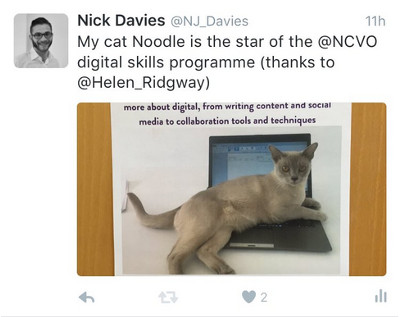 So it looks like NCVO decided to use a cat to advertise its programme. We don't know why.

So anyway, the cat belongs to Nick Davies, public service manager at NCVO and owner of the most impressive Victorian mutton-chops in the world of charity, announced that his cat was a digital nomad. 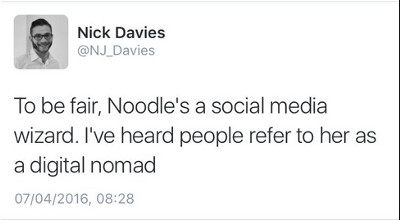 Now he's being followed by @digitalnomad.

Okay, so it's not actually that interesting. It may be that Diary wrote this piece mostly because it was entranced by the sheer luxuriant, otherworldly beauty of Davies' sideburns. But it does lead us to one interesting datum.

If you ever found yourself stuck on 799 Twitter followers, for example, and need to get over the hump to hit a satisfying round-number target, just tweet about digital nomads.

The end is nigh: if not for the world as we know it, then certainly for the ongoing charitable status of the Gaunts House Charitable Foundation – an organisation which, amongst other, less amusing things, runs courses on how to survive an apocalypse on the grounds of an 18th century Georgian estate in rural Hampshire.

According to (vaguely) reputable news source The Telegraph, the Charity Commission are looking into the organisation’s proposed “plans to to [sic, good work Telegraph] transfer its activities to the Richard Glyn Charitable Foundation” another charitable organisation, named for Sir Richard Glyn, the 10th Baronet of Ewell and 6th Baron of Gaunts whose family lives in the sprawling, Georgian manor house in question.

Weirdly, Sir Richard is neither a director nor trustee of either charity.

Anyway, let the Commission probe, says Diary. Let the caseworkers work and the policy people politic, or whatever it is they do. The real gold of this story is the fact that Gaunts House offers courses for “young people” to help ensure their “survival and profound togetherness with the view of giving them the tools to survive and flourish during and after the years of cataclysm envisioned for mid-century, or earlier”.

The course runs for three to five weeks and says that it teaches: “old skills and techniques… from chanting to basket-weaving, to making a bow and arrow, to fixing your car”, a chance to “learn husbandry” and to “hunt and forage your own dinner”.

Fix your car? This column can’t help but wonder quite how being able to strip, polish and re-assemble the engine on your Vauxhall Astra quite fits alongside fashioning a bow and quiver of arrows out of yew, or weaving a basket from river reeds and strands of hair wrenched from the fire-charred scalps of your fallen comrades, as being an ‘old skill’.

Anyway, the course is called the ‘Earth Stewardship Programme’ and, frankly, Diary can’t think of a better way to spend a couple of weekends – smack bang in the Heart of Darkness.