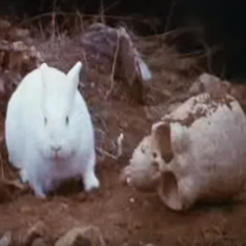 So a slightly abbreviated Diary this week, because – well, basically there are several people in the Civil Society Media offices who want to scrap this column so we can go down the pub.

But fear not, Diary knows how much loyal superfans prize this column, and mourn when it goes missing. (You know who you are.) So this column has delayed the debauchery of the whole staff to bring you the knowledge that a pet shelter has called in a psychologist to treat a violent rabbit.

Which is pretty cool, to be fair.

Apparently Jack the rabbit is so dangerous to visitors to Maria’s Animal Shelter in Cornwall, that he has left volunteers literally scarred for life. So he’s now being asked to lie down on a couch and think about his mother, or something.

Anyway, Diary is unfortunately unable to think about any violent killer rabbit without one of the world’s all time great pieces of cinema appearing in its columnar mind.

Diary isn’t sure that this quote from the new interim chief executive of the Fundraising Regulator is going to do what it’s intended to.

Stephen Dunmore said: “I very much welcome the opportunity to lead the development of the new organisation. The tremendous contribution that the charitable sector makes to our society depends on the trust that all those who donate have in our charities. I will work closely with charities large and small alongside other key partners to ensure that the Funding Regulator maintains and enhances that trust.”

See what the problem is? He doesn’t appear to know the name of the organisation he’s now running, which isn’t guaranteed to fill you with confidence.

On a final note, just to let you know, Diary has seen Star Wars. It was really good.