Reflections from an aid worker in Lebanon 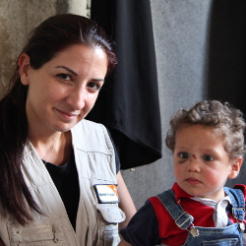 I’ve been involved in the humanitarian effort surrounding the Syrian refugee crisis since it began in 2011.

Over the past four and a half years, I have visited hundreds of Syrian refugees living in Lebanon. I’ve met Syrian refugee children who have been traumatised by the violence of war.

I’ve seen firsthand how funding shortfalls have impacted families on the ground. I’ve spoken to parents who felt they have no chance but to marry off their young daughters so there will be fewer mouths to feed. I’ve met children who have been forced to drop out of school in order to work and help pay for basic needs like food and shelter.

These refugees all have something in common: their look. It is not just a look of fear; nor is it a look of need. It is a look of despair. I never imagined that I would still be seeing some of these faces I met two or four years back. None of them can tell me what their future will look like, but for many, I know in my heart that their future is bleak. All you have to do is follow the news a little bit to know that we live in a broken world.

One thing that is clear for me is that the Syrian crisis isn’t a crisis of figures, war or even, dare I say, politics. It is a crisis of humanity.

I remember meeting this nine-year-old Syrian boy Abdurrahman who was imitating sounds of rockets when I met him. He started with a “BOOM”. Then, he made a whistling, whispering sound followed by a childish replication of an explosion. He carefully left a few seconds between the two distinct sounds to be accurate. His rocket sounds were so realistic.

He reminded me of the sound of rockets I personally heard when I was his age, during the civil war in Lebanon in the 80s.

As a Lebanese citizen who was born during the war and lived all of my childhood in a country torn apart by conflicts and violence, I could not but hold Abdurrahman's hand and tell him to stay strong, for his sisters and brother.

"They need you," I told him. All it took was few seconds and a few sounds from a child's mouth to bring back all the memories of destruction and fear I still have, piled up from my childhood.

Abdurrahman also explained to me the different sounds of a rocket launcher, a helicopter and a Meg plane. He said: "If you hear the sound of helicopter, you have to run for your life. But, if you hear a Meg plane, that means you are still alive, because it is very fast and you only hear it after it hits; but that also means that other people have died.”

I can’t imagine a child mastering a vocabulary of war. The scenes and situations he has survived seem to be imprinted in his mind. Will he still remember them when he grows up?  Will he remember running for his life many times? I don't know. I know I do.

It’s hard to believe that in less than six months’ time, many of these Syrian families would have left home for five years. I’m often asked: “What’s your five-year plan, Patricia?” For me, it’s easy. I’d still be a humanitarian worker. But for the refugees in Lebanon, Jordan, Turkey, Iraq and even Europe, what would be their five-year plan? Would it still be living in a refugee camp? Would children still be forced to drop out of school and work? Would families still feel the need to marry off their young child so they can afford to survive?

I’m hopeful that the answer would be no, in part because I’m thankful that my work with World Vision has allowed me to bring some hope to these children and families on the ground. Through providing cash for food, enabling access to clean water and creating a safe space for children through psycho-social support and early childhood educational projects, we are doing our best to help these families to get through this. But we need much more.