Theresa May, the Prime Minister, follows just seven accounts on Twitter, and they’re all charities. Kirsty Weakley investigates (sort of). 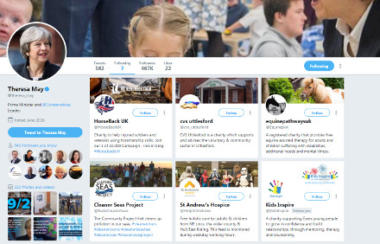 Social media is a key part in the modern politician’s communications toolkit. Who needs spin doctors, speech writers and communications advisers to craft perfectly honed messages when you can fire off 280 character missives into the ether?

Politicians all have their own approach to engaging with the great unwashed on Twitter. Some have attracted a certain amount of criticism for their behaviour online - Donald Trump, for one - while others have used it to reach out to new audiences. Anyone remember the Milifans from the 2015 general election?

But our own Prime Minister has made a bold, and underreported statement via her Twitter account. She only follows seven accounts, and they are all charities.

Is this great news for the sector? It looks as though charities really are being put right at the heart of government.

But why only seven? There are after all 168,000 on the Charity Commission’s register and many more that are either too small to register, and a whole bunch in Scotland and Northern Ireland.

There also doesn’t seem to be much that connects the seven. Two of them are based in Essex, two are hospice charities and two feature horses. But it doesn’t really make much sense – they’re not even any of the ones that May is connected to as a patron.

I was confused. I had burning questions about how and why this came about. So I did what any good journalist does and tweeted about it.

And lo, my questions were answered by Charlotte Rose a political reporter for BBC Essex, who replied to say: “She never used to follow anyone, then her first follow was a charity in her own constituency. Then she decided to have a ballot of MPs and whoever wins gets to nominate a charity in their patch.”

I care! And I also know why!! She never used to follow anyone, then her 1st follow was charity in her own constituency. Then she decided to have a ballot of MPs & whoever wins gets to nominate a charity in their patch

The first winner of the ballot was the recently elected MP for Chelmsford, Vicky Ford, (I hope she hasn’t got the impression that this is how other things at Parliament might work), who nominated Kids Inspire.

It appears that the ballot takes place each week, with the most recent charity to benefit being HorseBack UK from Aberdeenshire.

What should charities do?

Well first charities will need a hefty dose of luck. But there are some things that could increase your chances.

Probably not much. Any endorsement from a senior figure is nice of course, but I can’t imagine a follow on Twitter will significantly alter people’s perceptions of your charity.

But, as long as May isn't ousted, in a few months the list of charities that she is following might tell us something interesting about the kinds of charities MPs favour.

I’ve created a list though of all the charities she follows so anyone can see what May sees when in between meetings about Brexit and whatever else the government is apparently doing, she opens up her Twitter feed.

In a way I’m kind of jealous. Unlike most people, who are faced with a tirade of doom and gloom about the state of the world when they open the app, May instead gets to read only about the wonderful work of seven (and counting) charities.