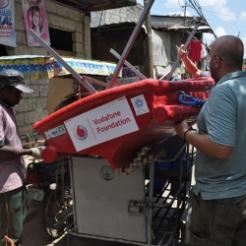 Our charity is currently working on disaster risk reduction (DRR) in the Philippines and I’m conscious that my two previous blogs have both focused on the related difficulties. Having gone into such detail on why DRR is problematic I thought this month I should talk about how we’re working to overcome some of the challenges involved.

As I noted in January, funding for preventative DRR is much harder to come by than for relief in the aftermath of a disaster. Private donors, including the public and companies, who might also want to use donations to highlight their social responsibility, can be put off by DRR’s 'invisible' nature.

As a result the funding that is available for DRR tends to come in the form of Official Development Assistance (ODA) or through large, structured grants. Accessing such funding can be tough for newer, smaller organisations like ourselves as doing so can take significant resources in terms of time, skills and experience. As a result DRR work is mainly undertaken by larger, more established organisations.

While these organisations are doing a great job I can’t help but wonder if this situation in some ways leads to the continued marginalisation of DRR? If smaller organisations were able to build some DRR momentum of their own would they then be able to persuade their existing supporters and partners to also get involved? Would this in turn help attract new donors to the cause?

These are, of course, not just rhetorical questions in our case. We’ve secured funding to set up our operations and launch projects but to reach our full potential we’re going to need to “mainstream” DRR and engage many more donors who don’t usually support such efforts.

One of the ways we’re planning to do this is through our model of actively welcoming volunteers to participate in DRR. By mobilising volunteers, who then become advocates for the projects they work on, we’re able to tap into their own personal and professional networks that would otherwise be closed to us. This model worked very well for us in Haiti following the 2010 earthquake. Of course that disaster initially generated a huge amount of attention but interest in the long-term recovery has now certainly faded in some quarters.

However, despite the waning interest we’re still able to fundraise in support of our ongoing, locally led projects thanks largely to the connections built between our volunteers and Haitian partners. We believe that in the same way these connections have allowed us to keep supporting Haiti after outside interest has faded, so too can volunteer involvement help us make DRR projects more popular.

Another way we’re working to generate interest in DRR is by leveraging the relationships we’ve built with donors who have previously supported our response work but are new to prevention projects.

For example, one of our first initiatives has been to support a local youth group in engaging new members in their environmental advocacy work through an arts workshop. Environmental degradation contributes to disaster vulnerability, so this fits neatly within our larger DRR goals. However, this type of project can be an especially hard sell to some funders - after all it’s about as intangible as it gets.

However, one of our existing donors was happy to cover a significant portion of the workshop’s costs because they’re strong supporters of both the arts and the environment. By framing DRR in a way that aligns with their own priorities we’ve effectively persuaded this donor to fund DRR for the first time.

Of course, if we truly want to gain mainstream support for DRR then we also need to engage new donors with our work. One of the ways we’re aiming to do this is through projects that provide the tangible satisfaction, and even recognition, that some donors really look for.

For example we’re implementing a scheme where donors can 'sponsor' a fibre-glass flood rescue boat (pictured) in return for having their logo or name displayed on the final product. While distributed in advance of a flood these boats will be in the water, and therefore visible, in the immediate aftermath of a disaster when external attention is highest.

All these examples of how we’re working to overcome some of the challenges of DRR go straight to a larger question - can smaller, emerging organisations make a meaningful impact in terms of prevention? Only time will tell, but we’re hopeful that our approach will ultimately find ways to make DRR popular in its own right.