Stephen Cotterill: 'Go forth and raise!' - what we overheard at the International Fundraising Congress 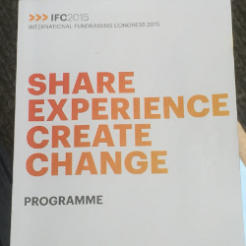 Last week Stephen Cotterill had his ears open at the International Fundraising Congress. He charts the wisest and weirdest words from the world of fundraising.

There was a lot of inspiring speeches and uplifting sessions in the sleepy seaside town of Noordwijk last week as the great and the good of international fundraising gathered for the IFC in the Netherlands.

There were wedges of wisdom, snippets of sense, panfuls of passion  ... and gallons of gossip. There was plenty of ammunition for anyone keen to play buzzword bingo, and the Civil Society Media team quickly scratched off "world changing", "innovate", "paradigm shift" and "donor-centric". But we also gathered some succulent quotes.

Here are a few. In the time-honoured tradition of journalism, they are quoted entirely out of context:

"Don't allow your ideas to become the compromise salami."

"We are not only fundraisers; we are facilitators in a whole new supply and demand ecosystem."

"It's a wonderful soup analogy and I'm just going to run with it."

"We need to build Sleeping Beauty's Palace for fundraising!"

"The good stuff is where your donor's 'why' coincides with your charity's 'why' and it's always emotional."

"Go forth and raise!"

Applause for the app

Sitting at the bar earwigging, however, was not the only way to gather the fundraising lowdown. The IFC organisers very kindly built an app, and on that app people could post whatever came into their heads ...wisely or unwisely:

"Bag of socks, an iPhone and a camera. The power of influence."

"Fellow IFCians 'n' fundraisers, take heed of the importance of what we do and go forth once again to do what we love."

"Futurology 2016: BIG disappointment. Global Giving is NOT the next big idea!"

"Love has no labels."

"Quote of the day: for a gay man, you're really scared of glitter."

"Time for the #IFC2015 dress up gala. Watch out for the wolves girls!"

"Has anyone got a David Cameron mask? I am sitting next to three little pigs at dinner!"

"Does anyone have safety pins or a sewing kit? I am having trouble with my wings."

"Just googled for an image of 'stupid donors' and the image that was on the first line was of Ken Burnett!! Classic!"

"I am convinced that good wine can be a great problem-solving partner for fundraising."

"20 Empire state buildings could be built whilst all of us were watching Gangnam Style. What's your YouTube strategy?"

"Bye folks thanks for the shot in the arm, much needed it was too."