More than £400m should be raised from dormant insurance policies to establish a fund to support innovation in the charity sector, according to a report from the Centre for Social Justice. 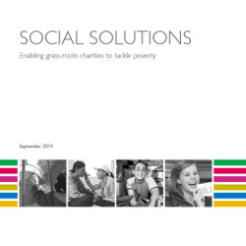 More than £400m should be raised from dormant insurance policies to establish a fund to support innovation in the charity sector, according to a report from the Centre for Social Justice.

The report, entitled Social solutions: enabling grass-roots charities to tackle poverty, also calls on the government to introduce a series of measures to tackle “charity deserts” in deprived areas, where little or no voluntary work is going on.

The report says the social sector is an under-used resource in tackling societal problems, and that it should be commissioned by government in more instances.

Its other key recommendations are reform to improve the skills of commissioners and give them more freedom to employ the sector, and reform of several funding mechanisms, including giving employees a right to request access to payroll giving and allowing an exemption from Financial Conduct Authority rules for social investment.

The report calls on the government to access £400m in dormant insurance policies using a similar structure to the Dormant Bank and Building Society Accounts Act, which took money from unused bank accounts and is expected to raise more than £400m for social lender Big Society Capital.

It says the money should be used to create something similar to the Social Innovation Fund in the US, established by the Obama administration, which it says “has been a highly successful model for investing in innovation”.

The fund makes grants to philanthropic intermediaries, who match the government’s contribution, select organisations they believe have transformative ideas, and provide them with support and funding. It is accompanied by rigorous analysis of how effective the ideas are.

"We recommend that the Cabinet Office looks to establish a UK Social Innovation Fund focused on taking the most innovative ideas in the UK and developing them into commissionable public services that can make a real difference to the lives of the most vulnerable people across the country."

The report also says that “deprived parts of Britain tend to have both fewer registered charities and less philanthropic resource than more affluent areas”, and says the government should take steps to address this imbalance.

The report proposes “a three-part plan to tackle charity cold-spots around the country”. It says that first better data must be gathered on where there are few charities, and that this must be followed by a grantmaking and capacitybuilding programme to grow charities in those areas, as well as more work to strengthen community foundations.

The report also says that commissioners need far more support and skills if they are to find the best solutions to social problems, including those coming from the charity sector.

“Improving commissioning requires commissioners with the skills, capacity and motivation to commission the best possible services,” the report says. “Commissioning is an extremely complex job, balancing immediate financial demands and the benefits of economies of scale with the need for long-term investment and involvement of local organisations, all within the context of complex procurement regulations.”

It calls for cross-sector networks to spread best practice, an accredited qualification for commissioners, and a better accountability framework to hold commissioners to account if they do not follow best practice. It also recommends reform of the legislation around transferring staff out of the public sector, known as Tupe, to reduce the burden this can place on external employers.

The report also calls for a relaxation in the restrictions around social investment.

Polling suggests that there are almost one million people with assets between £50,000 and £100,000 who are actively interested in social investment, the report says.

"Yet at present regulation often prevents the public investing in charities: financial promotion regulations generally require investees who are not authorised by the Financial Conduct Authority to have their investment FCA approved.

"This can cost charities many tens of thousands of pounds."