Ahead of the pandemic the UK’s largest foundations were “already beginning to face major challenges in meeting increased need”, according to new research.

The Association of Charitable Foundations (ACF) published the Foundation Giving Trends Update 2020 at the end of last week as an interim report, instead of what is usually a fuller report. It will publish the 2021 report before the end of the year.

For the 2020 report, ACF has analysed data from the largest 300 grantmaking foundations covering the financial period 2018-19.

Just over half of the foundations in the sample increased their grantmaking in real-terms, although this is down from two thirds seen in previous years.

There were 19 new charities joining the Top 300 this year, including the Aberdeen Foundation (ranked 44), Issa Foundation (68), the Alexander Mosely Charitable Trust (114) and Stelios Philanthropic Foundation (126).

Meanwhile, voluntary income increased by 6.3% to £2bn, however ACF cautions that this stream is “more volatile” and not evenly spread throughout the cohort.

For example, the Jordan Charitable Foundation received £48m from the estates of one of its original founders in 2018.

Slowdown in growth of investment assets

“This continues a pattern of a slowdown in the growth of investments which are such an important underpinning of foundations’ assets, out of which to grant fund,” ACF says.

The report suggests that this sluggishness can be attributed to market uncertainty related to Brexit. Other factors include trade disputes between the US and China, and a slowdown caused by China reducing its debt by deleveraging. 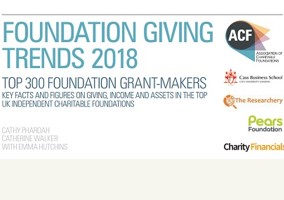 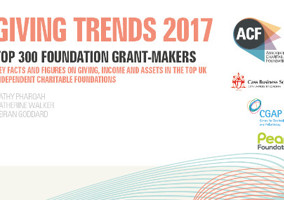 Grantmaking by top 300 foundations rises to ‘record high’ of £2.9bn