History was made this week when international accounting standard-setters met with a group of leading UK charity financial directors to discuss the need for an international standard for not-for-profit entities. 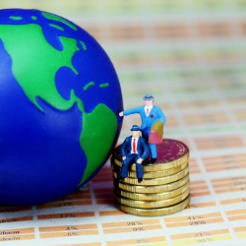 History was made this week when international accounting standard-setters met with a group of leading UK charity financial directors to discuss the need for an international standard for not-for-profit entities.

The behind-closed-doors discussion, held under Chatham House rules, was attended by representatives of the International Accounting Standards Board (IASB) and the International Public Sector Accounting Standards Board (IPSASB), together with senior members of three leading UK professional accounting bodies – ACCA, CIPFA and ICAEW – and the Charity Commission.

The invited group of 20 participants were brought together by the Charity Finance Group (CFG) to consider whether the existing international accounting frameworks, based as they are on the needs of the business and public sectors, should be changed to accommodate the unique characteristics of civil society organisations which do not operate for profit and are independent of government control.

The charity Statement of Recommended Practice (Sorp) has governed the way UK charities account for their activities for almost 25 years, since its introduction in 1988. But recent trends in the setting of global accounting standards suggest to many that, over the long-term, sector-specific Sorps may not survive.

Delegates, including senior finance figures from British Red Cross, Cancer Research UK, and Oxfam, debated how best to respond to such a scenario. Three possible courses of action were identified.

Firstly, could International Financial Reporting Standards (IFRS), which are designed to deal with for-profit businesses, be supplemented with specific guidance which would apply in areas where IFRS are not applicable to non-profits? There was some concern expressed by delegates about whether the IASB would have either the time or will to make this a practical proposition.

Alternatively, some felt that International Public Sector Accounting Standards (IPSAS) were likely to be a better fit with the reporting needs of non-profits, and that there would be fewer gaps to fill if IPSAS, rather than IFRS, were used as the starting point for charity-specific guidance.

The most radical option identified was for an international accounting standard to be specifically written, and adopted, for the not-for-profit sector.

But the problem of getting such a proposal off the ground was summed up by Tim Boyes-Watson, director of Mango, who said: “The difficulty is that there is no one to speak for NGOs in the world of accounting standards – there isn’t a home for this in the international standards-setting framework.”

Richard Bray, finance, regulatory and taxes manager at Cancer Research UK, echoed this sentiment, adding: “You’d think it should be possible to create a common voice on this issue for global civil society.”

That is the challenge now confronting CFG as it ponders the next step to take forward this ground-breaking discussion.