Russian oligarchs who the UK government has applied financial sanctions to would find it difficult to continue as a trustee, according to the charity regulator.

The Charity Commission said that if a trustee became the subject of financial sanctions it would “intervene as we deem necessary”.

So far, the UK government has applied sanctions to a number of Russian businessmen over the war in Ukraine.

When Civil Society News contacted the Commission earlier this week, before the latest round of sanctions were announced today, we were told that the regulator was not aware of any charity trustees affected by sanctions. However, they said that being sanctioned would be problematic.

A spokesperson said: “We cannot see how an individual subject to financial sanctions in the UK could act and discharge their duties as a trustee of a charity. They are, as a result of the sanctions, prohibited from accessing economic resources. Trustees have a legal responsibility for the administration of their charity. They are custodians of charitable funds and hold them on trust for their charity.

“They have control over the management and administration of the charity and therefore, its assets. This applies irrespective of whether they are a signatory to the charity’s bank account or physically have access to the charity’s funds. We will consider any information that suggests that an individual subject to UK sanctions is acting as a trustee of a charity in England and Wales and intervene as we deem necessary.”

This morning the government updated its sanctions list to include Roman Abramovich, Chelsea FC’s owner.

Abramovich had been planning to sell the club and donate “net proceeds” to a new charity to support victims of the war.

However, because the government has sanctioned him it is unclear if this will happen.

In a statement this morning, Nadine Dorries, culture secretary, said Chelsea FC had been issued with a special licence.

She tweeted: “To ensure the club can continue to compete and operate we are issuing a special licence that will allow fixtures to be fulfilled, staff to be paid and existing ticket holders to attend matches while, crucially, depriving Abramovich of benefiting from his ownership of the club.” 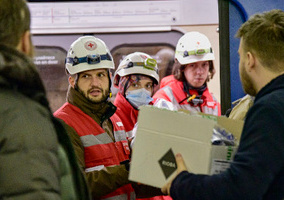