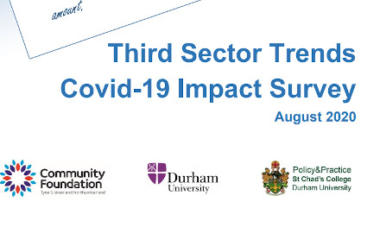 Charities are significantly less confident about their future income from a range of sources following the onset of the coronavirus pandemic, according to research out today.

Third Sector Trends Covid-19 Impact Survey finds that “there has been a collapse in confidence about future income levels”, with 56% of those surveyed expecting income to fall over the next two years, compared to 16% in 2019.

Researchers set out to see how attitudes had changed since the original Third Sector Trends study, which took place between July and December 2019 and surveyed over 4,000. Today’s findings are based responses from 400 responses in England and Wales in late June and early July.

Professor Tony Chapman, director of research at St Chad’s College, Durham, and author of the report, said: “At the moment, leaders of third sector organisations are feeling pretty nervous about the future – and with good reason.”

However, he emphasised that the level of uncertainty at the moment, means things may not be as bad as some fear. He added: “The individual comments suggest a good deal of variation in attitudes ranging from strong optimism to outright pessimism – while others present ambivalent feelings.”

Rob Williamson, chief executive of the Community Foundation, which commissions Third Sector Trends, said: “We can’t say whether the fears of organisations surveyed will come to pass, but the data gives us a benchmark for when we come back in 2022 and find out whether this lack of confidence was misplaced.”

Pessimism about income from private sector

Respondents are now less confident of being able to secure income from private companies, with many sectors experiencing difficulty due to Covid-19.

Similarly, charities expressed concern about the future of trading income in their responses.

One commented: “Charities which relied on trading income have been hardest hit, yet funders are focusing on charities who they already fund.

“Medium-sized charities are the ones struggling to secure funding as turnovers are above £1m and outside many funders’ eligibility. [We’re] not sure why this would be relevant in the current circumstances.”

Pessimism about income from trusts and foundations

Despite several trusts and foundations creating extra funding rounds to support charities in crisis, those surveyed are more cautious about their long-term prospects for obtaining grants.

The report says: “Some TSOs [third sector organisations] expressed worries about the ability of trusts and foundations to be able to sustain grant funding programmes because they too may be affected by the economic downturn.”

Pessimism about income from government

Thirdly, respondents were concerned about the pressure on local authority funding increasing.

“Many leaders of TSOs recognised that the constraints imposed on local authorities would limit their ability to tackle community problems, and felt that the third sector would be relied upon to fill the gap,” the report says.

The report notes that there were some optimistic comments from leaders.

“While concern appears to be deep rooted, many of the comments made were ‘measured’ or ‘stoical’,” it says. “This is not surprising because, as Third Sector Trends has consistently shown, leaders of TSOs have faced continual challenges over the last decade but have been resilient in their response.”

One respondent said: “Interestingly, Covid-19 may provide some opportunities for us to expand our work, as we have already been approached and funded by commissioners to deliver additional support services.”

Another said: “The £10k Covid-19 grant we got actually doubles our reserve! We have no staff – so few overheads. But we are just a building, an empty shell. We cannot predict how many people will want to play bingo, have parties, do sports training in the months to come. Or invent new uses for halls.”

A third said: “Charities are having an uncertain time, however the extra funding from coronavirus funds is very helpful. A grateful thanks to all donors.”

Elsewhere, July’s Charity Health Check survey, which is carried out by ACEVO and the Centre for Mental Health, warns that more charities are likely to make redundancies over the next 12 months.

The monthly survey monitors the financial health of 85 charities, and this month one third said they expect to make redundancies, while a further 36% are unsure.

July’s financial health score was 48 out of 100, which indicates charities' finances were stable compared to the previous month.

Kristiana Wrixon, head of policy at ACEVO, said: “It appears that the huge number of redundancy announcements we have seen over the last few weeks are just the tip of the iceberg.

“The chancellor has said he wants to protect as many jobs as possible, but with only three in 10 respondents saying they do not think they will make redundancies over the next 12 months, it is clear a lot more support is required to protect jobs so that charities can be there for all of us as we feel the impact of what is predicted to be the biggest global economic crisis for almost 100 years.”

90% of charities expect income to drop over six-month period