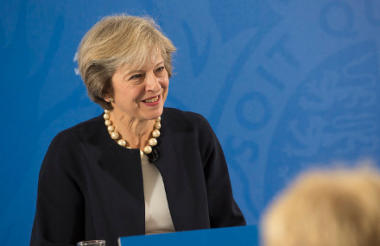 The Conservative Party has not included its previous promise to make it easier for people volunteer in its 2017 general election manifesto published this morning.

In its 2015 manifesto the party promised ito introduce new rules to allow five million workers to take three days a year as paid volunteering leave. It had not introduced those rules by the time of the current election, and had not taken any public steps to do so, although the government has issued reassurances saying the policy still existed.

The Department for Business, Energy, Innovation, and Skills is leading on the policy but no consultation has been launched and when Civil Society News asked earlier this year we were told an announcement would be made in “due course”.

Charities are mentioned just four times in the most recent manifesto. There is no mention of volunteering and the phrase "shared society" - Theresa May's vision for the country, launched at the Charity Commission annual meeting - also does not make an appearance.

However the manifesto does contain promises around international aid spending, the tax status of independent schools and support for refugees and asylum seekers.

The manifesto said that it will “maintain the commitment to spend 0.7 per cent of our gross national income on assistance to developing nations and international emergencies”.

However it will look at changing the rules because: “There are still ways that we can improve the way that taxpayers’ money is used to help the world’s most vulnerable people. We do not believe that international definitions of development assistance always help in determining how money should be spent on whom and for what purpose.”

It added that: “So we will work with like-minded countries to change the rules so that they are updated and better reflect the breadth of our assistance around the world. If that does not work, we will change the law to allow us to use a better definition of development spending, while continuing to meet our 0.7 per cent target.”

The Conservatives want independent schools to do more to earn their charity status.

The manifesto said: “We will work with the Independent Schools Council to ensure that at least 100 leading independent schools become involved in academy sponsorship or the founding of free schools in the state system, keeping the option of changing the tax stus of independent schools if progress is not made.”

The Conservatives also pledged to reform the asylum system and involve charities.

“We will work to reduce asylum claims made in Britain and, as we do so increase the number of people we help in the most troubled regions,” it said.

There would be a “review international legal definitions of asylum and refugee status”.

The manifesto promises to “make sure our councils get the help they need to deal with people as they arrive, and establish schemes to help individuals, charities, faith groups, churches and businesses to provide housing and other support for refugees.”