Sector umbrella bodies have called on the government to scrap the 20 per cent discretionary rate relief for business rates provided by local authorities, and increase the mandatory relief from central government to cover the full amount. 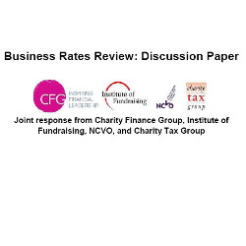 Sector umbrella bodies have called on the government to scrap the 20 per cent discretionary rate relief for business rates provided by local authorities, and increase the mandatory relief from central government to cover the full amount.

The Charity Finance Group, Institute of Fundraising, NCVO and Charity Tax Group said the current system was uneven and unclear.

In a joint response to a government review of business rates, the four bodies argue that a mandatory rate relief of 100 per cent for all charities that is paid for by central government would “lead to a fairer, simpler and more efficient system”. They suggested phasing in a new system over five years.

Currently charities can claim up to 80 per cent of the tax back as mandatory relief on buildings that are used for charitable purposes. Local councils can then provide discretionary relief of up to 20 per cent.

Rate relief is currently worth around £1.5bn to charities. Michael Birtwistle, senior policy officer at NCVO, said that they could not estimate how much the proposal could save the sector because “there are no centrally published statistics splitting out mandatory from discretionary, so we're not sure how much of the reported cost of the whole is made up of discretionary relief”.

Data collected in the Charity Shops Survey 2014, published last October by Civil Society Media, found that local authorities only granted one pound of discretionary relief for every seven they could potentially grant.

The government opened a consultation into business rates in the spring to combat avoidance. Sector umbrella bodies have previously expressed concern that some of the ideas to tackle rates avoidance could harm charities.

The response also included a number of ways to improve the current system to make sure that charities are not disadvantaged.

It suggests that the government should force local authorities to make their criteria for discretionary rate relief available and that the Department for Communities and Local Government should produce best practice guidance for setting the relief.

It also urged the government to clarify the rules about trading subsidiaries such as a shop or a café.

To tackle uncertainty felt by charities about the future of discretionary relief, it suggests that the DCLG advices local authorities to give at least one year’s notice before cutting or withdrawing relief.