Charities must be central in government’s Brexit strategy, says CAF 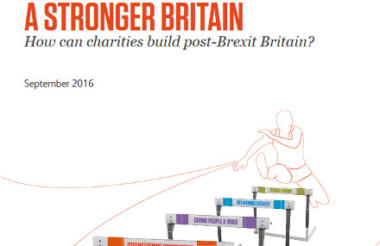 Charities must play a crucial role in supporting the government to deliver a Brexit strategy, a new report by CAF urges.

The report published last week - A Stronger Britain: How can charities build post-Brexit Britain – says that “making Brexit work for everyone and delivering a strong society depends, in no small part, in making charities a core part of the UK’s new settlement”.

“Charities operating on the ground are well placed to see [community] divisions firsthand, and to help provide solutions that bring people back together,” the report states. “Charities must rise to the challenge and work to ensure that they are giving a voice to all.”

The report calls for central and local government to “commission charities to monitor levels of community cohesion and threat levels”.

In particular, it recommends for resources to be allocated to charities, to enable them to report concerns – “with an obligation on the government to act on recommendations from charities”.

“Chasms in society have developed and need bridging,” the report states. “The role that charities can – and should – play must not be overlooked.

“No single entity or sector is going to have all the answers, but it is clear that charities are an integral part of the solution to the challenges on the horizon. There are many areas where charities are best placed to help government achieve its aims, strongly backed by a public keen to see charities at the heart of communities.”

Further recommendations include for charities to advocate on behalf of beneficiaries and for this to be “explicitly protected in the new British Bill of Rights”; for new devolution deals to give local politicians a mandate to promote and enhance the role of charities, volunteering and philanthropy in their local area; and for the Department for International Development to work with governments to ensure a legacy of support and infrastructure for the not-profit sector.

According to CAF, the adoption of these suggestions would see charities “boost the UK’s role through the exercise of soft power and securing a global legacy of thriving civil societies”.

“In so many areas, charities can help tackle the social divides in Britain today, and ensure that policy works for everyone,” he said. “Around the world, charities can show how British values of tolerance, equity, entrepreneurialism, dynamism and of course generosity can be a force for good.”

But he said “real partnership” was needed between the government and charities in order to “grasp the opportunity”.

“Working with government, parliament and all parties to ensure their expertise, energy and unique outlook are at the heart of our efforts to make Britain better,” he said.

CAF said it will build further on the report’s ideas and themes “in the months and years ahead”.

The EU referendum result in June, sparked a raft of responses from charities, including from Karl Wilding, director of public policy and volunteering at NCVO, who said the sector’s resulting shock risked charities being seen as part of the “London metropolitan elite”.

Speaking at an Institute of Fundraising convention in July, Wilding said the referendum result should make the charity sector as a whole question whether or not it is in touch with the communities and people that it claims to represent.

“I think the real problem that we have as the voluntary sector is that we didn’t see this coming. How can that be? We’re meant to be representing the communities that felt most remote from government, that felt most disaffected and that they weren’t being listened to,” he said.

“I think a question this sends our way is: do we actually reflect the communities that we serve and that we work with? Or are we actually that metropolitan, London elite that people have just revolted against?”