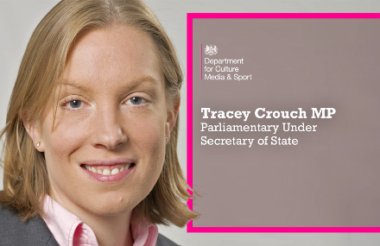 After yesterday’s confusion around the appointment of the new minister for civil society, Tracey Crouch will be confirmed as the next minister for sport and civil society soon. Representative bodies have congratulated her on the job, although some expressed concern about the potential size of the brief.

NCVO: ‘Cautious about the size of the portfolio’

Sir Stuart Etherington, chief executive, said: “I have already talked to the new minister and am pleased that she is approachable and keen to understand her brief.

“However, I remain cautious about the size of a portfolio covering sport and civil society. We hope that the civil society portfolio will receive its rightful level of attention and profile, given its economic and social importance.”

Acevo: ‘Opportunity to reconsider the relationship between the OCS and the sector’

Vicky Browning, chief executive, said: “We’re delighted to welcome Tracey Crouch to her new role. I’m sure her time as minister for sport, heritage and tourism – dealing with issues such as lottery funding and problematically white, male boards – will stand her in good stead for this job.

“Her commitment to helping the vulnerable is also well known to her constituents, and her background in public affairs with the Pet Advisory Committee and experience of volunteering as a sports coach also shows her long-term interest in the sector.

“We will wait and see how the new ministerial brief balances civil society and sport. This change of brief gives the new minister an opportunity to reconsider the relationship between the Office for Civil Society and the sector, ensuring it is based on consultation and collaboration.

“The initial lack of clarity about the appointment of the minister for civil society was somewhat disappointing but the asks we make of Government today are the same as we made when the election was first called.

“A sector employing one million people should not have to wait on Twitter for confirmation of their minister. But Tracey has, within hours of her appointment, shown a refreshing willingness to engage with the sector and we very much look forward to her bringing the same vitality and imagination to the office for civil society as she has in her sports brief.”

CFG: ‘We need a positive vision for the sector’

Caron Bradshaw, chief executive of the Charity Finance Group, said: “We congratulate Tracey Crouch on her new appointment as minister for sport and civil society.

“Charities are faced with a number of operational challenges which strain their resources including the apprenticeship levy, irrecoverable VAT, and an ever more complex commissioning environment.

“We will urge the new minister to work her colleagues across Whitehall as well as civil society to ensure the government has a positive vision for the sector which tackles these challenges and enables charities to be as effective as possible in meeting the needs of their beneficiaries.”

IoF: ‘Fundraising is a big part of the solution’

Peter Lewis, chief executive of the Institute of Fundraising, said: “I offer my warm congratulations on behalf of the fundraising community to Tracey Crouch on her appointment as minister for civil society. Charities play a vital role in our lives and communities spending over £1,500 per second on important causes, and directly employing over 800,000 people in every part of the country.

"Demand for charity services is always growing but many charities are struggling to raise the resources they need. Fundraising is a big part of the solution and we would urge the minister to look at ways to grow and support charity fundraising, especially for smaller charities and community groups looking for new ways to fundraise.

“Fundraisers also know that sport and mass-participation events are excellent ways to engage people, build communities and raise money for good causes, and we look forward to discussing with the Minister how her role can help harness that engagement to benefit good causes.

John Barrett, chief executive of the Small Charities Coalition, said: "We are pleased to welcome Tracey Crouch into her new role, and are meeting with her in due course to discuss the challenges facing small charities.

“With the recent confusion around ministers, it's so important that the government communicates clearly with smaller organisations, who often struggle to know who to go to to make their voices heard. We hope that the significant role that civil society plays in building community, contributing to the economy and supporting public services will be better recognised by government and responded to."

Rob Cope, director of Remember A Charity, said: “With parliamentary responsibility for civil society, Tracey Crouch MP has a key role in influencing the future of legacy giving and we’re excited about the opportunity of working with her.

“In recent years, government’s support has helped to quadruple the number of solicitors that proactively give clients the option of leaving a legacy in their Will, but the potential is even greater. We hope that government continues to champion this vital form of giving.”

SEUK: ‘She’s very much the Harry Kane of the Conservative Party’

Peter Holbrook, chief executive of Social Enterprise UK said: “We would like to welcome Tracey Crouch MP as the new sports and civil society minister. It’s great to have such a star of her party taking ministerial responsibility for the sector. In many respects, she’s very much the Harry Kane of the Conservative Party.

“We know social enterprise brings innovative, community focused solutions to building a fairer economy and creating inclusive growth.  There is much work ahead that needs to be done to ensure the outstanding work of the sector is not relegated to the bottom of the policy agenda – making sure that social enterprises solutions are placed at the heart of the industrial strategy, the upcoming review of the Social Value Act and the development of the mutuals strategy.

“There was a very real sense of momentum building before the general election and we look forward to working closely with Tracey to ensure that government doesn’t take its eye off the ball and maximises the opportunities, values and promise social enterprise holds.”

Jay Kennedy, director of policy and research at the Directory of Social Change, said: “We look forward to hearing more about what the government's approach to charities and the wider sector will be. The policy issues which come under the civil society brief are complex and important - not just to hundreds of thousands of organisations and volunteers - but the millions of people they help. They aren't an 'add on'. They are a critical part of successful policy for government across any number of critical areas and social issues.

“We would urge Tracey Crouch to get out there and listen not just to the usual umbrella bodies but also those charities working on the ground, and especially those charities that were campaigning most vigorously during the election. If she could find a way to secure a refund of the £425m taken from the Big Lottery Fund to pay for the 2012 Olympics too that would be great - as Secretary of State for DCMS she and her officials should know this issue well.”

NPC: 'The sector must be a partner'

Dan Corry, chief executive of NPC, said: "We welcome the appointment of Tracey Crouch as minister for sport and civil society. This is an important role in providing leadership and a voice for the sector at the heart of government. We look forward to working with her to improve and strengthen the impact of charities, funders and civil society. In particular we will be asking the new minister to consider four areas as a priority - putting civil society policy at the heart of government, focusing regulation on impact, target funding on impact, and opening up administrative data.

"At their best, charities play an important role in bringing communities together to achieve social change, delivering effective public services, and providing expertise on - and giving voice to - the causes and beneficiaries they exist to serve. In a hung parliament government will need to reach out beyond party boundaries, and beyond Westminster. The sector must be an important partner for the next government as they seek to tackle the challenges facing our society today."

Neil Cleeveley, chief executive, said: “Sport and charity are such major parts of our society they each deserve to have a dedicated minister. The confusion over this announcement and the fact that for the first time since 2006 there will not be a minister focused solely on our sector sends out the wrong signals.

“We should not forget how hard we fought to get our own minister or the reasons why we felt it was so important to have our own voice in government.”

“Tracey Crouch has a good reputation as sports minister but will she have enough time to give our sector the support it deserves?”

British Youth Council: ‘Concerned about the size of the brief’

The British Youth Council said it would be writing to the minister to highlight concerns about the size of the brief.

Ife Grillo, vice chair – participation and development, British Youth Council said: “We can’t wait to continue our work with the Department for Culture, Media and Sport but we are particularly concerned about the size of Tracey Crouch’s brief and we’ll be seeking out reassurances at the earliest opportunity. We have repeatedly made it clear we believe a minister for youth should be appointed and we’ll be using this opportunity to highlight that issue again.”

CAF: 'Delighted about the strong ties to the sector'

John Low, chief executive of the Charities Aid Foundation, said: “We are delighted that Tracey Crouch has taken on responsibility for civil society matters. As well as the strong ties that Ms Crouch will have forged with charities during her time as minister for sport,  she has a strong relationship with a number of local charities that means she is well placed to understand the unique contribution that charities make to society, as well as the challenges that we face.

“Our sector has enjoyed a constructive relationship with the charities minister in the past, and I look forward to building on that with the new minister in the coming months. Top of our list of shared priorities will be tackling divisions across society, ensuring that the Brexit deal delivers for charities, and that our sector is able to continue providing vital support to millions of people in so many ways.

“However, the decision to merge the minister for civil society role with another portfolio is concerning, coming as it does on the back on the announcement that No 10’s special adviser on charities will be leaving her post. The political uncertainty, division and social challenges we face mean that the country needs an increased role for charities, not a reduced one.  It will be vital that this does not result in the voice of charities and the needs of their beneficiaries being neglected.”

Tracey Crouch to be announced as minister for civil society